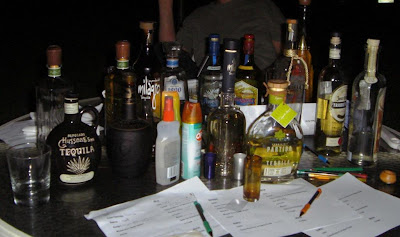 This has been a particularly woe-is-me kind of summer with an onslaught of hard physical labor and exhaustion, no big fabulous trips, no money, not a lot of playing, and fewer fun excursions than usual. I haven't felt much like blogging mostly because I didn't want to wallow in my misery any more than I already have, and there's not that much else to write about. Plus, I'm usually too exhausted when I get back to the cinderblock chalet so it's all I can do to click a few links and drop a few comments here and there.
I've always been rather moderate in my drinking habits, sticking mostly to beer, wine, and the occasional margarita. But for the most part beer has been my drink of choice, especially when there is a lot to be consumed. I used to hold it pretty well, but these days I wouldn't even know.
So last week I went to a Tequila Tasting party. My friends have somehow managed to accumulate 17 different bottles of tequila, and they felt it was time for people to check them all out, all at once. They provided us with a list so that we could indicate our favorites. Apparently I'm still in school mode - I must obey all instructions exactly so that I'll be sure to get an A, especially when there's a handout. I took the whole tasting thing VERY seriously.
Fortunately they served food about halfway through, or I never would have made it. Also, I didn't really drink 17 full shots - I had 17 semi-half shots. That's not that much I guess. But it's a whole lot more than I'm used to. And everyone else except for Phil only tried about 6 or 7 of them. So Phil and I became lab partners. He rated all of his shots with stars, and I wrote comments for mine. I revisited several of the early ones that I had neglected to comment on, (it's easy to get distracted and forget) and I even had some of the one with the dead scorpion in the bottom which tasted sort of hickory smoked. I think they said that was called mesclun, not tequila. Whatever, it was on the same table so I drank it.
I found the tasting experience to be pleasant and delightful over all, and I enjoyed having a sense of purpose about something that could be completed in one evening. I did have to take a couple of breaks in order to maintain some semblence of coherency in my comments though.
I was worried that I'd have a huge hangover the next day but I woke up feeling unusually clear-headed - it was really quite amazing. And what is truly astounding is that I was also suddenly in a ridiculously good mood which has lasted to this day. I feel like a completely new person - all negativity has been completely cleared out, cleansed if you will.
I don't know whether it was the tequila or the wonderful life-affirming news that we received earlier in the evening, but the fog has definitely lifted. I feel more energized, enthusiastic, and happier than I have all summer long. And now it's September so I'm good to go. 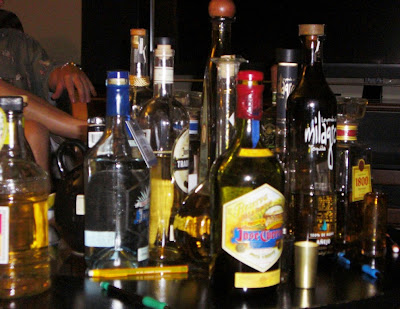 I'll have to keep that in mind. I'm getting over the mean reds... Sounds like a great time.

Yeah, it was fun to let loose for a change and not worry about all the work I had to do the next day. And it worked out pretty well actually.

Oh, I fully believe in the power of great tequila. Had myself some last night, actually. ;-)

Oh wow... a tequila tasting party. That's a neat idea. And the side effects seem to be much better than wine tasting. I'm glad you're feeling better!

Lilu and Twinkie: Tequila is good stuff! I had no idea. Maybe I'll have some more next month. I really like the no hangever aspect.