Although seeing a herd of up to seven deer in my backyard in Silver Spring is not that unusual, I was still rather surprised to see a possum in downtown DC tonight on the way home from my gig at the Market Inn.

I was stopped at the light at 3rd and D Street SW right by the Federal Center SW metro station when the possum trotted across the street in front of me. He crossed during the walk signal, stayed in the crosswalk, and continued on down the sidewalk on D Street. At first I thought it was a giant rat, because why would there be a possum running around in this section of DC? So I had to check it out.

I turned left on D Street when the light changed and followed him. He stopped near some bushes and we stared at each other for a minute and then he continued on his way. It was definitely a possum, or an opossum. Weird.
Posted by Cyndy at 3:16 AM 2 comments:

I sure hope we can get our house finished this summer because I'm going to be pretty busy this fall. I recently found out that I'm going to be able to finish my M.M. in Jazz Studies with the help of a teaching assistantship. Awesome!

And in June I will be subbing for a week with the Jack Million Band from Belgium for a series of concerts in Iowa, including the Glenn Miller Festival. Yay me.

So I'm getting in tiny little bits of travel here and there, but the major stuff like touring and ship work is going to have to wait another whole year.
Posted by Cyndy at 4:27 PM No comments:

out of the blogging closet

Well I’ve finally outted myself. Sort of..... At least now I've got one foot out the door.

Today I played a rehearsal and I asked my colleague Deborah if her friend that I saw at the April concert was named Barbara and it turns out that, yes indeed, that's exactly who it was. Wow. So I told Deb how I had happened to have become a regular reader of Barbara's Looking2Live blog. Deb seemed to be pretty amused by the whole thing. It is kind of hilarious when you think about it even though it felt pretty awkward for me there for a minute.

I really need to say hello to Barbara now. I’ve enjoyed reading her blog for such a long time and it’s time to let her know how much I enjoy it. Maybe I’ll wait until she gets back from her trip to Italy, which I happen to know about because I read her blog!!!
Posted by Cyndy at 12:45 AM 2 comments:

I think I like this show even better than “Kiss Me Kate” which I used to think was my favorite Cole Porter show. Anything Goes is my new favorite. This was a high school production, but it paid decently and I was able to keep myself very amused.

Here are a few things:

1. Check out what the editor and publisher, or maybe even Cole Porter himself, wrote into the bass part!!! That’s pretty funny! 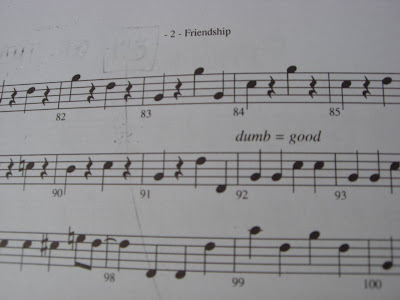 2. There were two dog characters in the show. One was played by a real live dog and the other was played by a stuffed animal. The guy who played the owner of the stuffed dog had to carry him around for most of the show, pretending he was real. It was pretty amusing. There wasn't a whole lot of interaction between the two dogs, obviously.


3. And the favorite quote for this show is:
"I don't think Erma picked that guy for the length of his pants!"
Posted by Cyndy at 12:42 AM No comments:

I don't know what was up last month. I had an astounding total of 33 gigs which is at least twice as many as I usually have. In addition I also did some big band rehearsals and played a concert with the Friday Morning Music Club Orchestra for fun. (no pay). I played jazz gigs at Lia's, the Carlyle Club, and the Market Inn. I played with a swing band at Glen Echo. I did 3 dates with the Harry James Orchestra. I played 7 concerts with a guitarist at various retirement communities. I played a recording session and 3 different musicals. This month might actually beat the entire year of 2007. Amazing.

I'm really loving the quantity and the variety of music I'm playing right now, but unfortunately my time spent working on the house is way down lately as a result of all of these gigs. So in spite of it all, I feel a little guilty. But I also feel very peppy and physically unexhausted since I'm not working on the house as much. And my hands feel great!
Posted by Cyndy at 4:36 PM No comments: