Stink Bugs in my Bass 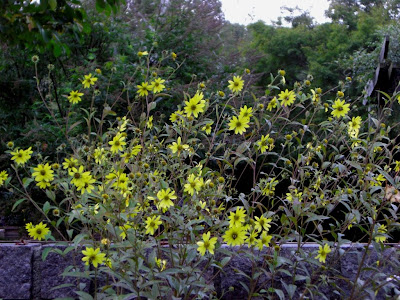 Wasn't it a gorgeously beautiful day today? The weather was perfect. But then I had an outdoor wedding gig and two stink bugs crawled inside my bass right in the middle of Pachelbel's Canon. They are probably still in there because I did not see them crawl back out. So what am I supposed to do now? I don't want stink bugs in my bass. It's disgusting. I really don't want my bass to smell like stink bugs!
Posted by Cyndy at 1:51 AM 8 comments:

We have Franz Schubert in the house! 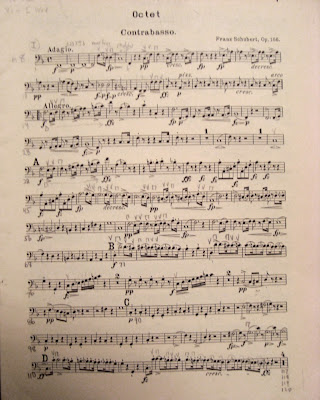 About a week ago my friend Nancy came over for a visit and decided that my living room would be the ideal place to get together for a reading of the Schubert Octet. She decided this in spite of the fact that the room was a complete mess, full of boxes and other stuff that I'd never unpacked. Maybe she was trying to do me a favor by forcing me to unpack. It worked!

The reason I hadn't unpacked was because I thought that it would be best to wait until all the baseboards and window trim was done before everything got spread out and moved into place. I hate the thought of everything getting all dusty from the relatively small amount of construction we have left to do.

I still think that, but it's time to actually start acting like I live here whether the house is finished or not. I'm so glad I finally got the stimulus I needed to do that. It's been kind of depressing having all those boxes piled up in there. Playing the Schubert is a much better use of that room.

Anyway I spent the past week painting the coat closet so I could put the coats away. It is so nice to have a coat closet! Our rental house didn't have one and it was always a problem. And that closet was the last room left to be painted so now the only painting left to do is the window and door trim and baseboards, if they ever get installed. Aren't I patient?

So over the last couple of days I've been moving all of the boxes to more appropriate locations and finally the room is ready for its inaugural chamber music session! 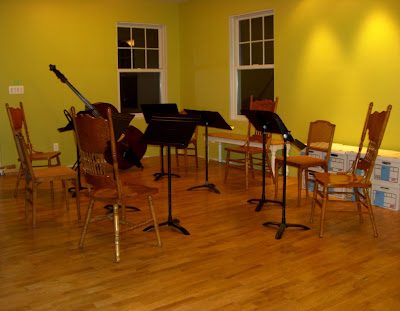 Nancy organized the whole thing and we'll have time to run through the whole piece twice I think. It's about an hour long. It's going to be fun to play it with some new people. Some of the players are friends or acquaintances and a couple of them I've never met before.

Later tomorrow I'm playing with a big band up in Baltimore at a place called the Wine Cellar. After that I'll be spending some time learning some new tunes (for me) for a wedding gig on Sunday. I think I might have actually even heard some of these songs before:

#41, Typical Situation, Ants Marching, Crash Into Me by the Dave Matthews Band; Upside Down and Times Like These by Jack Johnson; I'm Yours by John Mayer.

I guess I'll be checking them out on YouTube very soon.

Speaking of YouTube, here's a movement from the Schubert we'll be playing in about eight hours. I guess I'd better go to sleep now. Nighty-Night!

Subtitle: Strange Woman Forgets Everything She Learned in Math Class

This morning I woke up from a dream where I was trying to figure out whether there existed a formula for calculating the number of different combinations a series of five numbers could have. What a strange dream to wake up from, or even to have! Although I'm quite decent at arithmetic, I'm not really particularly a math type, so why would I even care about such a thing? Anyway, I was sure there must be a formula, which I probably learned in high school, but it's most definitely not something that's come up for me for at least 20 years.

So then, in my half awake state, still lying there, I started visualizing the possible number combinations for 123, because I knew I could do that easily and instantly. Because I'm so organized, I did the ones first and then the twos, and then the threes. Whoopdee Doo. I immediately saw a pattern and I thought I could also visualize it working for 1234 so I thought maybe I could make a formula from that. Keep in mind that I'm still half asleep while thinking all of this, but the snoring next to me is forcing me to become gradually more and more aware of my surroundings, and of what I am thinking, whether I want to be thinking or not.

I didn't think too hard about the combination of four numbers, I just tried to feel it, and it seemed okay, and that's when the pattern, if this is even right, kicks in more obviously. But what I was really trying to do at this point was fall back to sleep.

Instead, I did the pattern of multiplying descending numbers 3x2 (x1, what the heck) and stuck a four in front of it: 4x3x2x1. I don't know if this works, but it "felt" right and I was still too sleepy to care.

When I finally gave up trying to sleep and got out of bed, I was kind of more wrapped up in why the hell was I having boring mathematical dreams than I was in trying to figure out if I'd actually "discovered" a secret mathematical formula while sleeping, ha ha ha!

Then I thought, hey maybe there are some math types out there who are also bloggers and they will read this and set me straight. Since I have had almost nothing to say for months maybe I'll just write this all out and people will read it and say "That's enough! I'm never coming back! She's boring and weird and I don't want to read a bunch of low level mathematical crap. Who knows what she'll write about next to irritate her remaining three readers?" Or maybe the math nerds will take pity on me and tell me they used to dream the same thing - when they were five.

Sorry, I guess I got sidetracked by an early morning case of ADD (adult deficit disorder). So the formula was solidifying in my head: four different numbers gets 4x3x2x1, or 24 combinations. I was really feeling the layers of it and it felt right without even laying out the actual individual piles of number combinations. I really wanted to stay in that state of right brain-ed-ness and not let my annoying, detail-oriented left brain burst my happy little bubble of discovery and wonder.

But now that I'm awake I don't trust it at all, so I'm going have to actually physically double check with five numbers, to answer my original question that I had during the dream. I guess we can add OCD to the ADD. At least I'm well balanced.

Let's see if 5x4x3x2x1 gives us the right number, that is if I'm able to lay these out in an organized enough way to get them all. I guess that's what computers are for, but I'm too low tech to do it that way at this time, especially since I haven't the slighest idea how to do it.

Okay, I gave up doing it with five numbers. It's a little too unwieldy and unpractical to do it this way and I'm just not that interested. But I'm mildly interested. I'm going to do it with just four numbers and call it a day.

Did I miss any? I went across the first row with 4 in front of the six combinations of three numbers. In the next row I switched the threes and the fours but kept the rest of it the same. Then I substituted the twos with the fours from the first row, and then the ones. This is what my brain "felt" but did not calculate during the time that I was still half asleep.

So now the fives. You'd start the first row with 5 in front of those 24 combinations and then you'd substitute the 5 for the four in the next row and then the three, etc. for each of the 24 combinations. So you'd have five rows of 24 different combinations, right? So that's 5x4x3x2x1 = 120. Please tell me if I'm wrong, because if this is right I want to remember it. I would like for it to be right because it's kind of a groovy formula. Also, how would you write this in an actual mathematic formula, with x's and y's?

I guess this is a perfect example of if you don't use it you lose it. I'm sure this descending factor thingy has come up before sometime in school somewhere. I got as far as pre-calculus in high school but I don't remember a thing about it other than that I liked it and did okay with it - probably half Bs and half As. I'm not totally stupid. My favorite math course was geometry, which seemed more artistic somehow than other forms of math. And creative and logical at the same time. I liked that. Then it was on to music in college and it's been nothing but basic arithmetic for me ever since.

I just remembered why I was even dreaming about this. It was because I'd been dreaming that I would sell on Ebay some hand painted numbered tiles that I bought when I was in Sorrento on my cruise gig five long years ago. I wanted to figure out how many different house numbers would work with these tiles, which I'm not going to be using since they don't work with the color scheme we ended up with.

Uh oh, there's one number in my five tiles that is used twice. So my 5x4x3x2x1 thingy isn't going to work, even if it was the right formula to begin with. My gut instinct is telling me that I should do 5x4x3x2x1 and then divide that result in half. I don't know why I would think such a thing, and it's probably wrong. I've suddenly lost interest in this topic because the snorer is up and now I can go back to sleep. Maybe I'll dream up the right answer. But since I don't really need to know, maybe I'll just not worry about it anymore.

Also, before I was dreaming about selling my hand painted tiles on Ebay, and messing around with number combinations, I was playing millions of games of Free Cell in my sleep. I just discovered Free Cell after years of playing just plain old Solitaire. It's a lot more interesting and winning seems to have a lot more to do with creative organizational skills than it does with how the cards happen to fall.

So how was your morning? 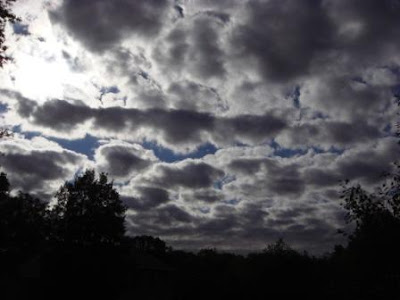 Is it better to be half asleep or half awake?

Is my glass half empty or half full?

And, most importantly, is my brain half empty or half full?