There's a nail polish that I wore as part of my getup for the tour I used to do called "I'm Not Really a Waitress." It's an excellent shade of red if you're into that sort of thing. And the name of the color made it more fun to wear somehow. It still amuses me.

I've been trying to figure out why I haven't gotten around to blogging in over a month. I've been busy but not ridiculously so. Well relatively speaking anyway. When I've had free time I've done other things. My brain has been in a different place since I moved back into my house. At least part of my existence is now back to where it should be.

I wasn't a blogger before the fire - in fact I didn't even know what blogging was when I started writing my first posts on the bus back in 2005. I wrote about the fire and its aftermath, put up a bunch of pictures from my three month cruise gig in Europe, wrote about the road gig, used it a little bit to observe how I felt about some of the post fire crap, and then it kind of became a little cheering myself up device, with pretty pictures and random little observations. I needed cheering up because for five years I was trapped in the limbo of our house situation and not particularly happy (rather horrified actually) about the way things were playing out. It was a rather miserable and bleak existence over all. So blogging for me was kind of an escape from all of that.

Now we're finally back in our house - well not completely, but at least we're living there. It feels great to be back. I've always felt some kind of connection with this particular spot. My sense of direction is based here. And there's just something that just feels right about living in the same location where I cut the grass.

Since moving back in we've done very little work on the house which has been wonderful from a labor and dirt perspective although as a person who likes to see things through to completion, it's been a little frustrating and discouraging. But it is so much nicer than it was before so I'll take that. And immediately after we moved back in the gigging started to suddenly pick up a lot, so that was excellent timing.

The only thing missing for me is travelling. I really want to get back to doing ships and/or a road gig. I've had to turn down a number of ship gig offers with really nice itineraries over the past four years and that just sucks. But after we tie up a few final loose ends I'll be free to do that once again. I can't wait!

If I'm going continue to do this blogging thing I'll have to find a different reason to do it. It's kind of nice to not need it to serve as an escape from my miserable existence any longer, hahaha. I know - it'll be the icing on the cake of my happy existence from now on. Or maybe the sprinkles. So if I don't post, it's because I'm on a diet.

So that's enough of that - now back to the usual fare. Yesterday when I was cutting the grass I noticed that one of our magnolia bushes has two random blooms on it, and they are much brighter and darker than what this bush usually puts out in the spring. 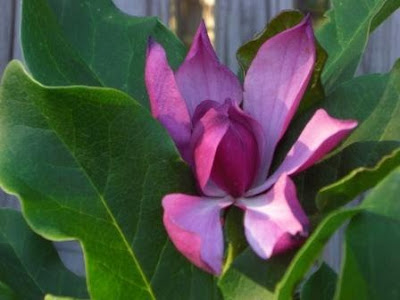 And then a tiny baby bunny hopped out from UNDER the mower just in the nick of time. It freaked me out even though it happens all the time, especially when the grass gets long. This one is the smallest I've ever seen. Look how short his little ears are! I turned off the mower and spent a little quiet time sitting there with him while I took his picture. I hope he didn't mind. 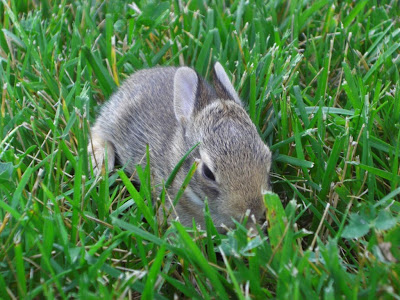 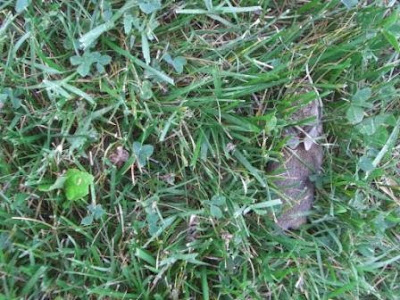