Unfortunately our show was the last thing scheduled for this beautiful old theater in Sandusky before it closed, which was very depressing. 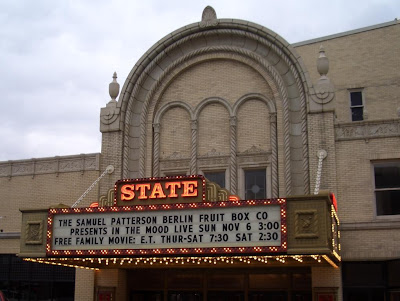 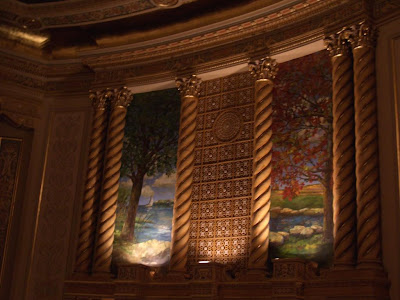 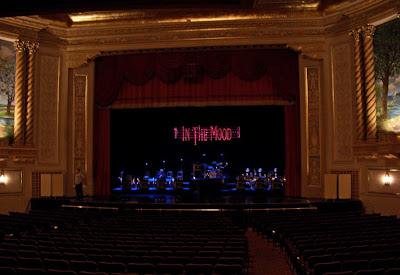 The next day I drove the car so that the wardrobe person and her assistant could relax on the bus. I got some nice foliage shots in WV on the drive down to Beaufort, SC. 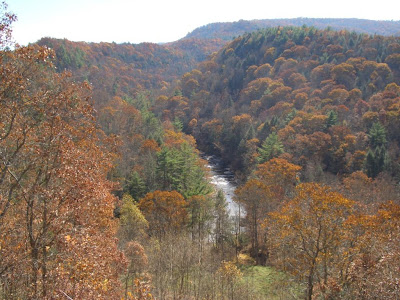 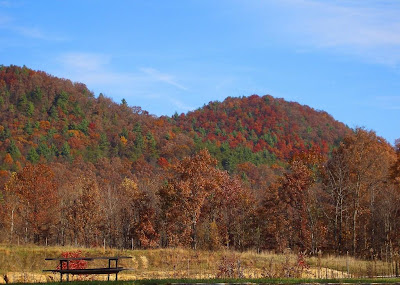 The rest of the fall tour was on the east coast. From November 8 through November 19, we did shows in:
Beaufort, SC
Rocky Mount, NC
Harrisonburg, VA
Newport News, VA
Clayton, NC
Southern Pines, NC
Elmsford, NY again!
New Bedford, MA
and finally, Kingston NY
Here are a couple of pictures from our last day off in Plymouth, MA 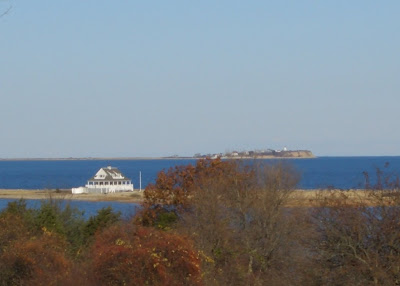 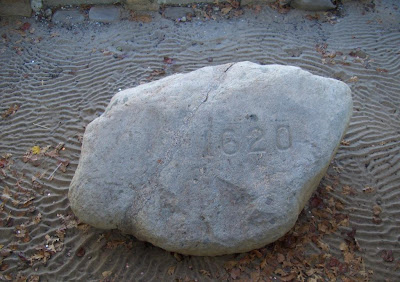 Apparently this is Plymouth Rock
It seemed rather fitting to be visiting Plymouth just before Thanksgiving!
Posted by Cyndy at 9:18 AM No comments:

The Halloween party took place at our hotel in Elmsford NY where we were playing at the Westchester Broadway Theater. There were tons of fun costumes and a pinata. I'm not exactly sure why, but it seems there are often pinatas at our "In the Mood" parties. 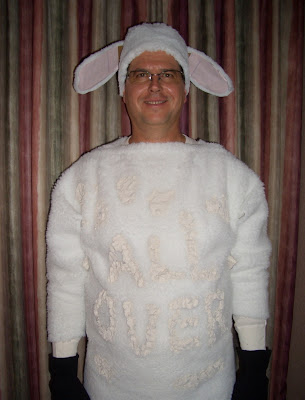 Doug went as his theme song "I'm Getting Cement All Over Ewe." Notice the words "ALL OVER" written in cement on his sheep's costume. Cute, huh? 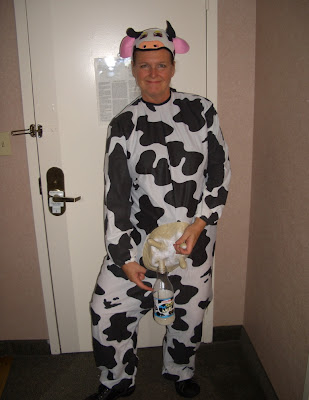 Since we seemed to be headed in a barnyard animals direction, I picked up this cow costume at one of our many stops at Walmart for the low, low price of $11.99. I though it needed some accesorizing so I hung a milk bottle below to catch the drippings. 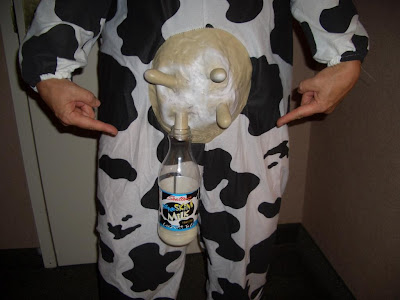 Here the lovely Quincy and beautiful Brian L, dressed up as some typical members of our audience. 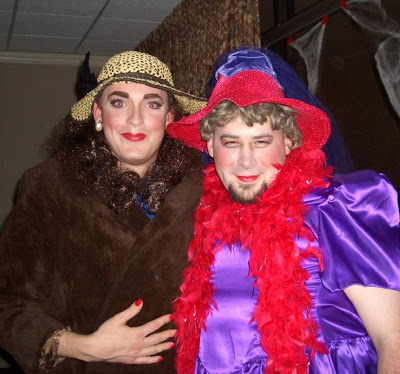 Brian C and Al M are probably the ones responsible for the pinata. 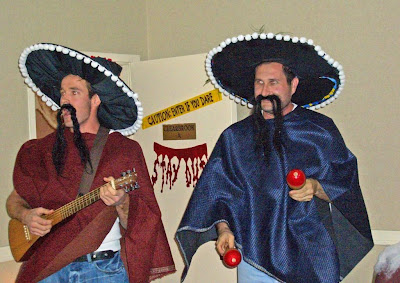 Nicole's costume was a reinactment of our Pawley's Island SC show which was easily our most rugged venue. The stage was inside a tent! 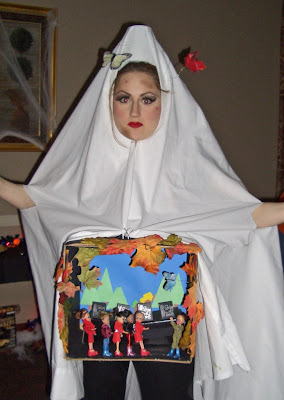 It was definitely the most intricate costume of the evening. 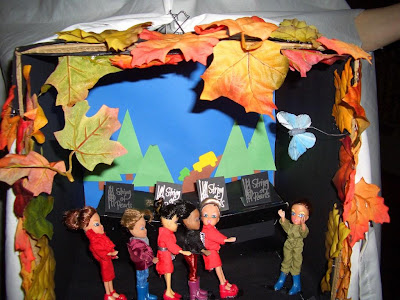 Bud, our producer, pianist, and the creative genius behind the show wore his Uncle Sam costume. 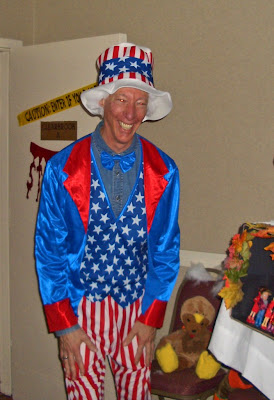 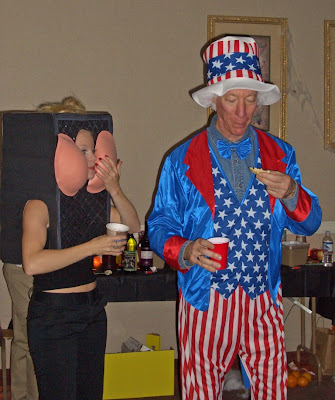 One time at a sound check Bud said "I need more Christina in my ear" which somehow became "rear" and she willingly obliged and paid tribute to it with her very cheeky costume. 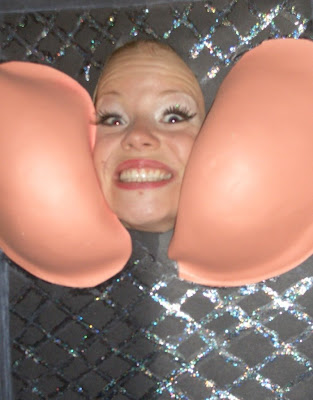 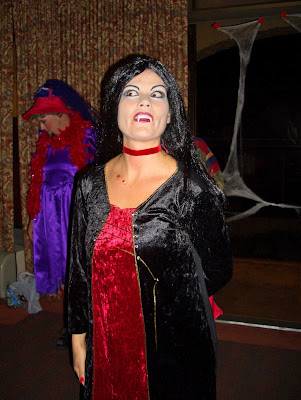 Wendy wants to suck some blood! 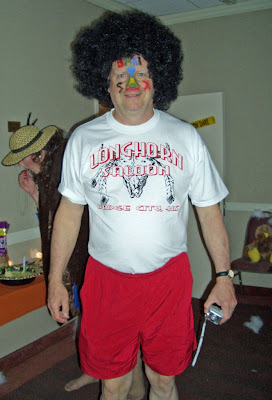 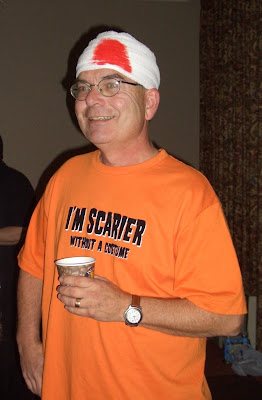 Tom got mugged in the hallway of one of our hotels. He decided to pay tribute to that exciting event because it was even scarier than Halloween! 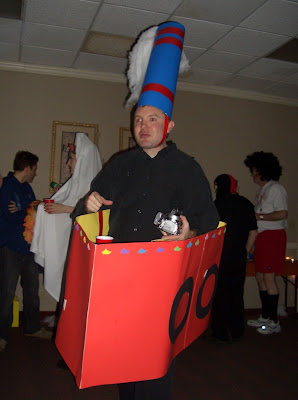 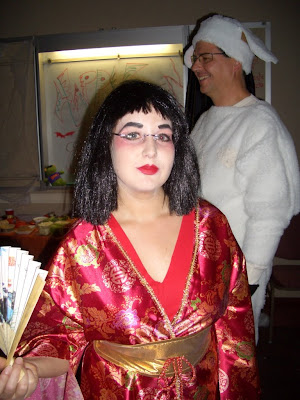 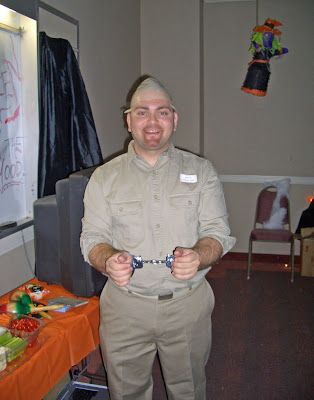 At one of our boondocks venues the local crew was made up of people from the county jail, so our technical director Jeff came as one of them. 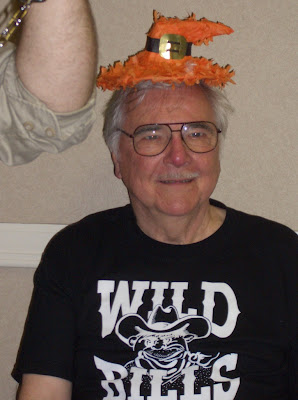 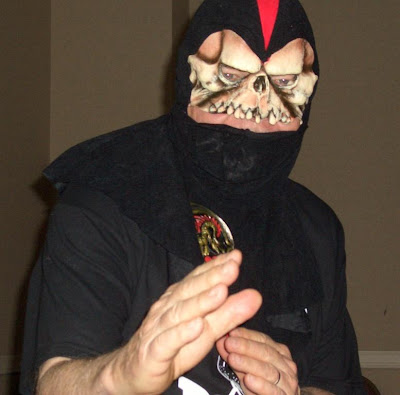 This is either Jody or Bill H. 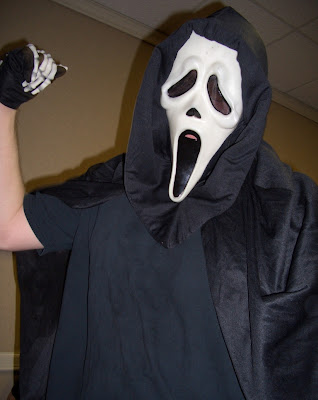 This too must be either Jody or Bill H. 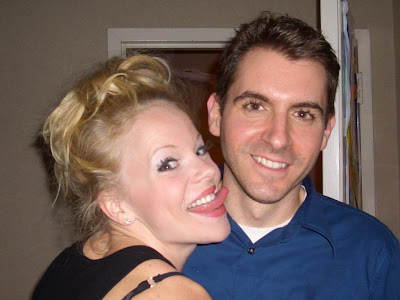 We had an honorary guest - Arthur Francesco, who sang in the show for the two previous years. I'm so glad he was there - I've really missed him being on the show this year! 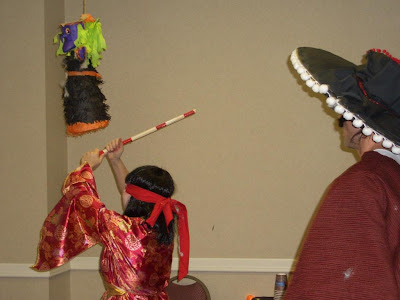 The final activity was the Beating of the Pinata.
Posted by Cyndy at 12:42 AM No comments: