Our Trip to Tangier Island

A long long time ago, when I first went to college as a piano major, we were required to sing in the chorus. Then all of the chorus members were strongly encouraged to be in the onstage chorus of the opera. My very first one was Faust and I loved it. I went on to be in Pearl Fishers, Carmen, and during my last year my friend JoAnn and I played celeste together down in the pit in a newly composed opera by Gerald Muller called Joshua. It was based on the life of a preacher on Tangier Island, out in the middle of the Chesapeake Bay, who had been required to lead prayer services for the British troops on their way up to bomb Baltimore in the War of 1812. The music was exciting and the story was rather interesting. It left me hoping to one day visit Tangier Island myself.

I had kind of forgotten all about that until I read this post from Capital Spice, which described their recent trip to Tangier Island in great detail. I decided I HAD to go there this summer, and a few weeks ago I finally did. If you want to visit Tangier, definitely go read their post - it has all of the necessary links for transportation and lodging. We basically replicated their trip except that we arrived late in the day and stayed for two nights.

It was a great getaway, and could have been totally relaxing except that we spent the entire day we were there riding bikes, paddling kayaks, and walking around all over the place. The island is really small so we just rode around everywhere about six times. They don't have or need cars on Tangier, but nearly every family there has a golf cart. Some of them keep a car on the mainland.

Most of the people who live on Tangier Island are descendants of the original families and we saw the same last names over and over in all of the various grave sites. It was interesting to hear the rather unique accents - they all had the same features, but in varying combinations and amounts. What I mostly heard was British sounding vowels, combined with some of the inflections and rhythms and articulations of Baltimore. I had a nice conversation with one little five year old boy who was already tending to his very own crab cages and he definitely sounded more British than anything else.

So we took the late afternoon ferry from Onancock, VA which is just over an hour south of Salisbury, MD off of Route 13. We got in to Tangier around 7 pm, checked in to Hilda Crockett's guesthouse, went out for dinner, walked around some, got ice cream, and then went to sleep.

The next day we had the huge and delicious breakfast, went for a bike ride, split a softshell crab sandwich, went to the museum, went kayaking, ate the huge and delicious lunch/dinner at Hilda Crockett's, rode bikes some more, walked down to get some ice cream, and then went to bed so early that we were able to squeeze in another bike riding session before our 7am departure the next day.

Since we were so far south we decided to go to the beach at Chincoteague. It was beautiful and I'd go there more often if it were closer and didn't have so many ferocious flies. After we were done with the beach we drove home.

And here are the pictures - you can click on them if you want to see a larger version: 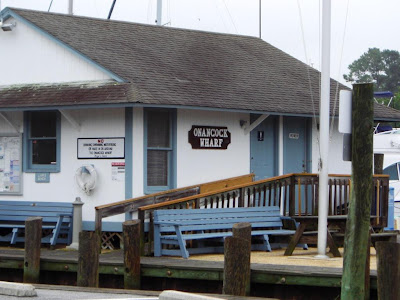 Onancock Wharf, where we caught the ferry 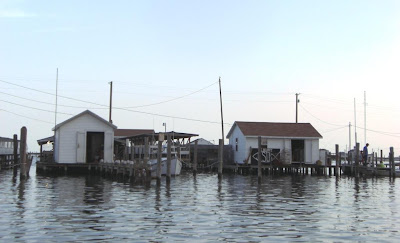 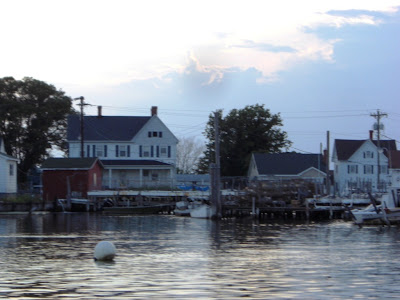 The town, from the water 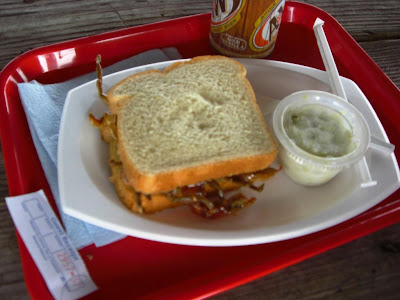 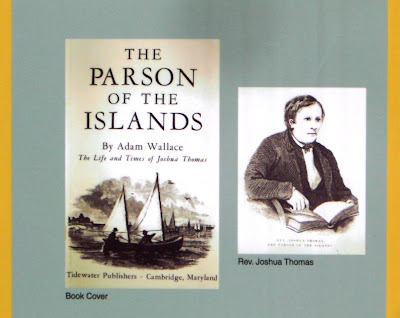 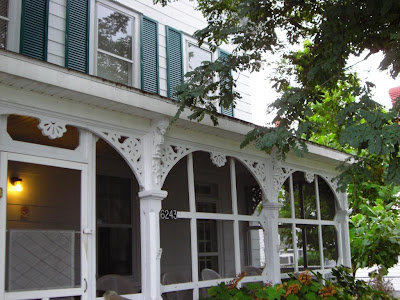 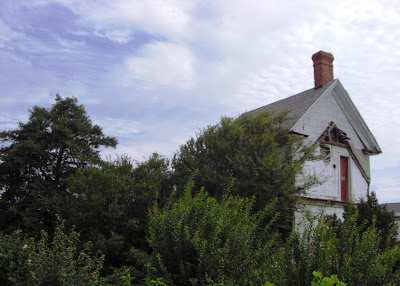 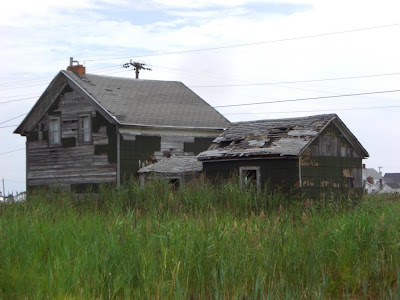 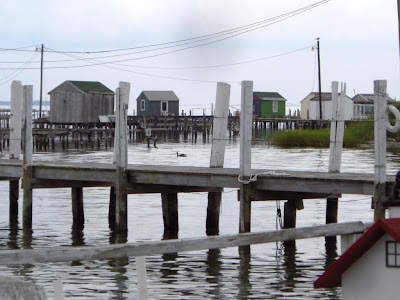 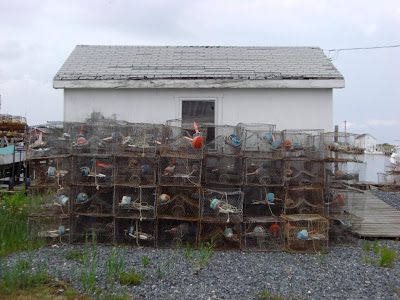 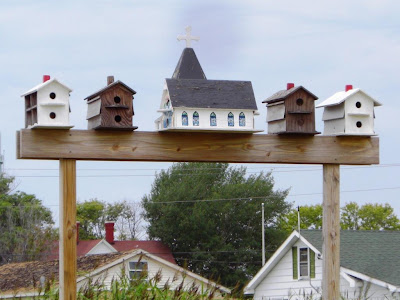 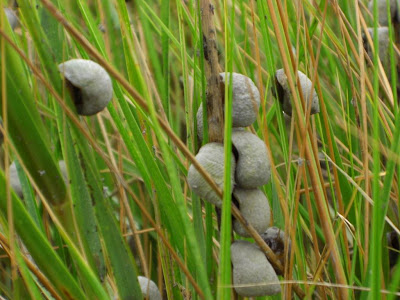 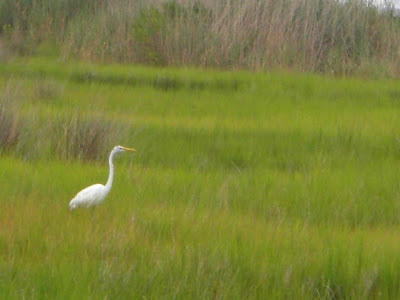 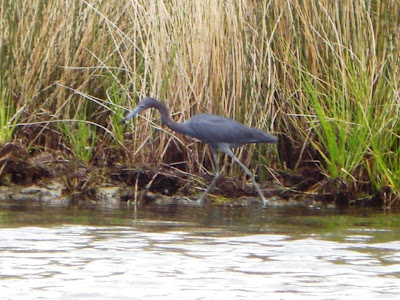 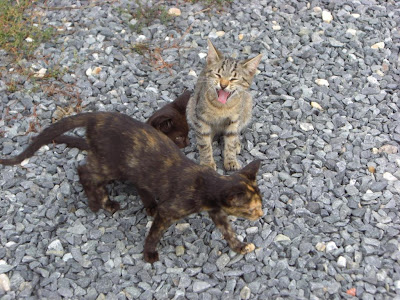 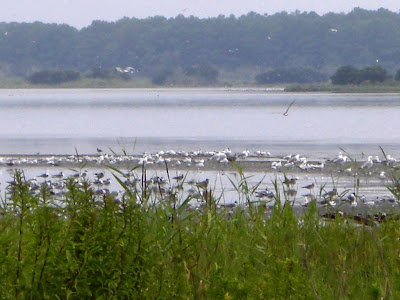 the birds at Chincoteague
Posted by Cyndy at 11:20 PM

Great collection of pictures! We'll have to check it out sometime.

oh man! I love this kind of stuff. I wish I lived closer. It would definitely be a trip worth taking if I had the money to.

I love crabs. Looks like my kind of place. How interesting that the original accent has prevailed until today. Was the biking as flat as it is on the rest of the Eastern Shore? If so, even I might be able to do it!

Mike - it's definitely worth checking out. It's like stepping back in time, and the museum was fascinating.

Twinkie - I do too. Now I want to visit other islands on the east coast that have been relatively isolated for a long time. I think it's very interesting the way society develops under different sets of circumstances.

Barbara - the island is extremely flat except for the bridges over the marsh in the middle of the island. The bikes are not particularly comfortable though and there are TONS of mosquitoes. We still had a blast though. Check out this video on youtube to hear and see a little more about Tangier. The little boy I spoke to had a more defined accent, perhaps because he was speaking more slowly.

Looks like a cool place to visit. Love the kittens and the abandoned houses.

Thanks Garrett. It was a very interesting place. And I've learned that day trips and short overnights to places nearby can be just as interesting, in a different sort of way, as all of the snazzy places I used to get to visit.

Now that I am coming out of my haze Iam looking forward to exploring this area. The I'll move on to snazzier places. I love mountains and forests and water. Dont need to travel far for that.

Yeah Garrett, that sounds like a plan! The variety of scenery is one of the nice things about this area. Mountains, oceans, lakes, watefalls, and forests are all within an easy drive of DC. And they all look different in every season.