﻿
Earlier this year, while sorting through a bin of old photos, letters, and other mementos that had belonged to Doug's parents, I came across a letter from Doug's grandmother to his father regarding her upcoming move to the United States from Spain.  Originally from Mexico, Esther Carrillo Rivera Vda.de Lagos, aka Esther Elliott, had lived in Spain for many years and was coming back to the United States to reunite with her family.

The letter was written in Spanish, and I have not gotten around to google-translating it yet, but it had to do with travel arrangements via ship, and making sure that all of the necessary paperwork had been taken care of.  Back in the 1950s everything was done via regular mail, so there was a lot of waiting around involved for various things to happen.

I never met Doug's grandmother, but I definitely want to learn more about her.  It seems like she must have led a very interesting life, from the few things I do know about her story.  I wish it had occurred to me to ask more questions as I got to know Doug's family, because they do have a slightly unusual history, but I didn't, and now there are things that I realize I'll never be able to find out.

It was a wonderful coincidence that we were already planning to be in Valencia this summer and I was thrilled to have an actual address for her.  All I'd ever heard about where she had lived was "Spain." I entered Esther's address from her letter into Google Maps and discovered that she had lived within walking distance of where we were going to be staying.  It was very exciting to be able to see the actual apartment where she had once lived, on a shady street in Valencia, just a few blocks on the other side of the Jardines del Turia, and fairly close to the old town section of the city.  I tried to imagine what her life was like living there all those years.  I'm sure she missed her family, but I hope she was able to enjoy all that Spain has to offer.  The city of Valencia is very different from the area in Jalisco, Mexico where she spent her early years.

So off I went on my reconnaissance mission to find her apartment.  I took a few pictures and after the trombone festival ended a few days later, I took Doug back there to see it. He didn't seem to remember that I had found her address way back in March, so he was pretty surprised to suddenly have me escorting him to visit his grandmother's former apartment in Spain, of all places.  It was pretty cool.  And here are the pictures: 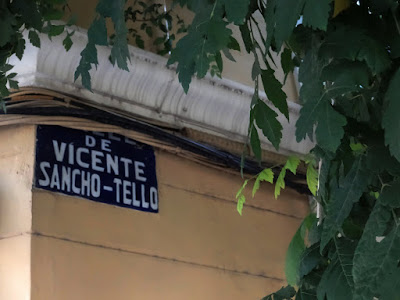 Calle Vicente Sancho Tello #28, 3A, Valencia, Spain.  That's the street corner plaque, and the lovely tiles below show her address. 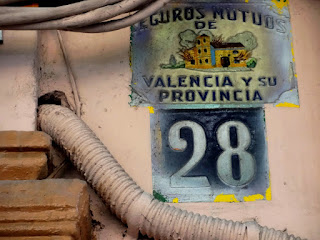 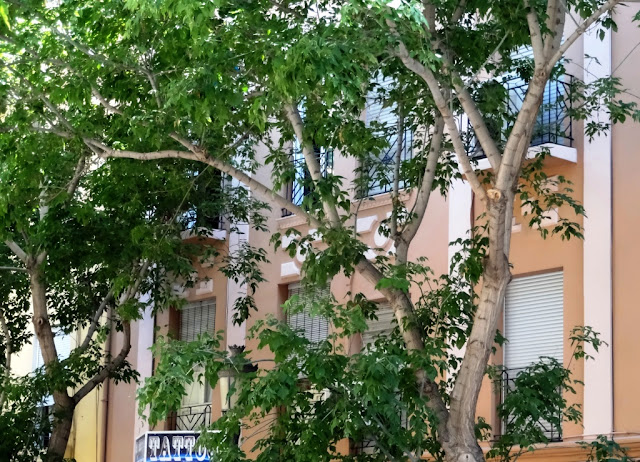 It's a rather ordinary apartment, on a shady street, just above a tattoo parlor, which I'm fairly certain was not there when she lived there in the 1950s. 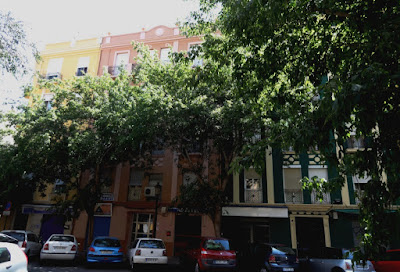 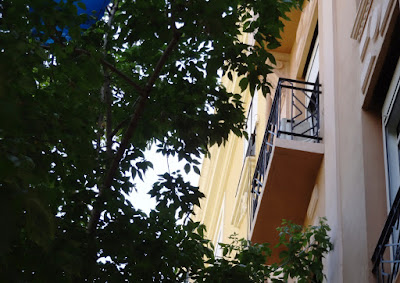 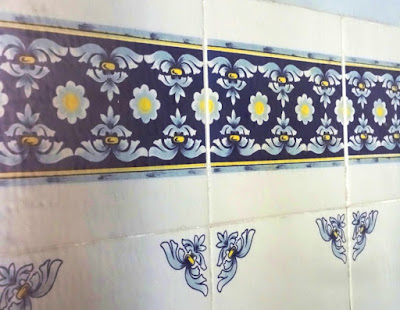 This is the tile work inside the lobby of her building.  And that's pretty much all there is to see.  I'm very glad we had this opportunity to see where Doug's grandmother lived during her years in Spain.
Posted by Cyndy at 4:50 PM