China Day One, NYC to China We stayed in Connecticut with one of my college roommates while we were rehearsing and playing our two concerts in NYC.  She dropped us off at the train station in Bridgeport at about 7AM the day of our flight.  We weren't very awake as we were approaching NYC and we missed our chance to get off at the 125th Street Station during the two seconds that the door was open.  So we rode on down to Grand Central and took another train back up.  It was very nice that we didn't have to pay extra for this little blunder.

From 125th we caught the M30 bus to LaGuardia in plenty of time for our 11:30 report time.  The plane finally took off for Chicago at 3PM.

The twelve hour flight to Beijing left Chicago at 8PM, Chicago time, and arrived at 11:30 PM, Beijing time, which is the equivalent of 10:30 AM, eastern time.  So our total travel time for that first day was about 28 hours. 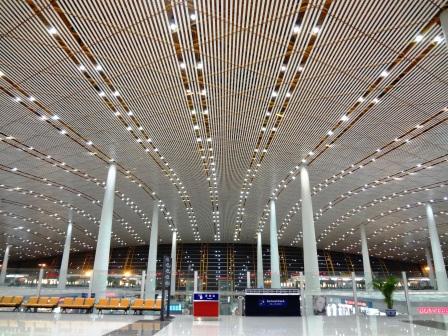 After going through baggage and customs, at the Beijing airport, we arrived at our hotel at 2:00 AM.
Posted by Cyndy at 7:44 AM