Since I haven't cooked a turkey in a really long time I decided that it might be a good idea to do a trial run before the big day.  Although I am quite capable of making things that taste good, I do not consider myself to be much of a cook.  It's not something I do for fun.  I enjoyed it when I was a kid, but for most of my adult life I've had a barely functioning kitchen and/or I've been on the road, leading a life completely devoid of cooking.  That's all over now, at least for the time being.

I was thinking back to the first turkey I had an actual hand in cooking.  My roommate and I had our boyfriends over and the two of us did the whole thing together.  Nothing went wrong and it tasted great - and that's all I can remember.

There was one Thanksgiving where Doug and I had both sets of parents over.  That's all I know.  I must have blocked the rest out.  It was probably fine.  Doug was probably running the show for that one, and people probably brought stuff.  I really can't remember a thing about it.

So this year we are finally back in our house and we have our big fancy new kitchen, which for me is kind of the equivalent of walking around the mall in hiking boots or having a big rugged truck to drive to gigs in.  I still shake my head at how ridiculously fancy it all is.  Of course we don't have a lot of the basic things that a normal well stocked kitchen has - like enough forks, for example.  We had to go out and buy a roasting pan and a carving knife, among other things.  At least we have plenty of dishes.  We didn't replace all of our kitchen stuff right away after the fire because we didn't have much room in our rental place.  And now we don't have the money.  That stuff is expensive!

Anyway, it's been my "turn" to have Thanksgiving now for close to 20 years, so I decided to go ahead and do it, ready or not.  My brother is allergic to black pepper so I needed to figure out how to get a turkey that doesn't have mystery substances injected into it and figure out how to make it taste good without using any pepper.

We got a fresh 13 pound turkey from Giant on Friday and I finally got around to cooking it this evening.  Since I don't have any cookbooks, I looked things up on the internet and watched a few videos on Youtube to learn how to do the various activities.  There sure is a lot of conflicting information to sift through out there.  So I just picked out the article or video that seemed like the best way to procede for each thing.  My choices were highly subjective, that's for sure. 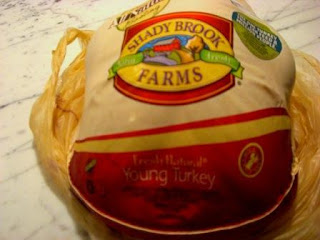 It really seems like individual creativity comes into play with most cooks almost immediately - judging from the various comments on each recipe or article, most people don't follow any recipe completely literally. It seems like they immediately start changing it without bothering to find out if the actual recipe is any good.  I guess it's not necessary most of the time to follow recipes exactly, although I'll bet it matters a lot more with baking.  I decided not to be too literal-minded about things, although I did clean the turkey very very meticulously, with a great deal of mocking from Doug.

So I figured out, based on some website that I liked enough to print out the pages, that I would cook the turkey in Doug's fancy-ass convection oven without brining it.  They raved about their test turkeys that were cooked at 375 degrees for an hour and a half to two hours without brining and since I don't know any better, I went with that.  I also decided not to stuff it because that makes things more complicated and it's safer not to stuff it.  I'll have to figure out how to get the stuffing moist enough without being in the bird.  Doug was helping a little bit until I kicked him out.  I got him to stick a few onion quarters, a couple stalks of celery, and some sprigs of fresh rosemary inside the turkey before he started acting up.

Doug's convection oven has a probe thingy that you can supposedly put in the turkey and then attach the other end to the wall of the oven and when the turkey gets to the right temperature it turns the oven off.  That kinds of creeps me out, and I was kind of relieved when it didn't register properly because then I could just use a meat thermometer like a normal person.  We've never used that probe thing before and I didn't want to mess with it.  But Doug did, and he wouldn't let it go.  That's when I sent him downstairs.

He came back up a little while later to help me identify the liver, which I was not supposed to use in the broth.  I'm such a non-cook that I wouldn't know a turkey liver if I saw one. Unfortunately that meant that he decided then and there to fix himself some fried turkey livers which stunk up the kitchen for a while.  But eventually the fan took care of the smell.

He went back downstairs and once the turkey was well under way in the oven I spent my time going back and forth between the computer and the kitchen, looking up every little thing up that I needed to find out.

I made turkey stock to use in the gravy, and I made a roux out of butter and flour for the gravy too, and cleaned a bunch of pans and utensils.

Finally the bell rang to check the turkey.  It was a beautiful medium golden brown.  Unfortunately the turkey was apparently sitting low enough in the pan, in spite of it having a rack, that the convection browning action did not hit the bottom three inches.  So I flipped it over and cooked it for another twenty minutes upside down.  I don't think it was actually cooked all the way judging from the juice, so the extra time was good.  But it ended up with a big dent on the top. 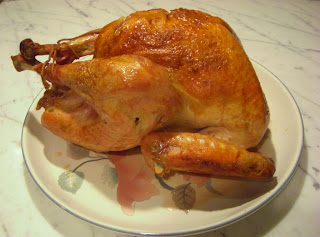 It's kind of ugly looking actually, but Doug declared it to be perfectly cooked.  It was tender and juicy and delicious.  He seemed kind of surprised at how well it turned out.  And he was shocked at the excellence of my gravy.  I think it will taste even better next time because this time I didn't do everything you are supposed to do.  It still tasted pretty good and there were no lumps.  I don't remember my mother or his ever doing roux or making broth to add to the gravy, so maybe that's why it was extra good.  Next time I'm going to try deglazing the pan with white wine.  So fancy-schmancy, yeah that's me alright. 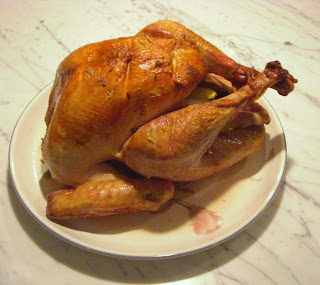 Look at that dent!  I'm paying big bucks for some kind of special fresh turkey from the Amish Market that I'll be picking up on Tuesday.   I will not allow dents to happen in Thursday's turkey.
Meanwhile,  I've already frozen most of the meat off of this turkey so it won't go bad and we'll have leftovers no matter what.  I also froze the gravy so that it will keep until Thanksgiving.  I'm going to have lots and lots of gravy.
Tomorrow I'm going to make more stock from tonight's turkey carcass so I won't have to mess with that again on Thursday while I'm trying to do everything else.  Also tomorrow I'm going to get Doug to cut up and bake the butternut squash for the soup I'm going to make.
Here's my menu:
Butternut Squash Soup
Salad Greens with a vinaigrette that has mustard and shallots in it.
Turkey
Really Basic Stuffing - shredded white bread, celery, onion, sage, etc.
Mashed Potatoes
Sweet Potatoes
Spinach Souffle with fresh dill
Cranberry Sauce that my mother will make
Apple Sauce that Doug made from our tree
Whatever pies my sister-in-law brings.
That's probably enough, right?  If it's not, then everyone will get to have the pleasant experience of not being miserably stuffed on Thanksgiving.  That would be okay I think, as long as the food tastes good.  I need to figure out where to use that fresh thyme I bought.  Other than that, I think I'm good to go.
Happy Thanksgiving!!! 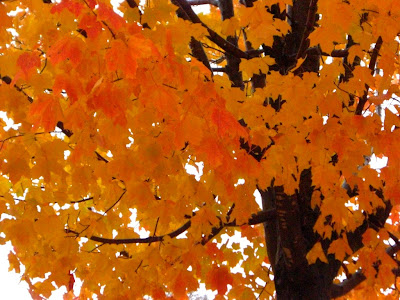 Absolutely incredible that you did a trial turkey run! I'm sure the TG turkey was greeted with lots of kudos. My recipe calls for flipping the bird over on the rack midway through, so you instinctively did the right thing.

With my lack of history cooking turkeys it was probably a good idea! It was nice to find out that I could pull it off. The second one turned out even better - it was a higher quality bird, supposedly, and I cooked it for 45 minutes upside down and then flipped it so the dents went away by the time it was finished.

It was so nice not to have to do anything other than defrost and warm up the previous bird's gravy on Thanksgiving. That's probably not kosher, but it sure saved time. I also added some of the carcass stock to the gravy to thin it out a bit. That sounds really gross, but it was very flavorful.

So yeah, it was a success, but all in all the process made me kind of queasy - from washing out the turkeys, to carving, seeing the organs, having to tear all the bones apart to fit it in the stock pot, to having turkey grease all over my hands. I had to wash my hands so many times that my calluses almost totally went away, and that's not good.

I am wondering if I could use one of your pictures for a tri-fold brochure for a bike tour. It is the picture of when you were in Sheboygan looking out at the lighthouse. Please reply to liferide@immanuelsheboygan.com. Thank you

Hi Anonymous, I just saw your request - I've been neglecting my blog lately. Sure you can use that Sheboygan picture if you haven't already done your brochure. I'll email you in a minute.