This is probably the last thing anyone wants to read about, including me, but I thought I'd go ahead and summarize our first Thanksgiving experience in our new house so that I can refer to it the next time I have people over for Thanksgiving. And I'm sort of hoping that won't be next year, but you never know!

I guess it was sort of cheating to do a trial run a few days earlier, but we are total rookies in the turkey department and we were using new and unfamiliar equipment.  We really wanted to make sure that everything was going to work, turkey-wise.

For the first turkey I made stock from the neck and the giblets, and made a roux out of flour and butter and combined it with the drippings and the giblet stock to make a ton of excellent tasting gravy, which I then immediately put in the freezer, along with all of the meat from that first turkey. The leftover giblet stock went into the refrigerator. The next day I made more stock from the carcass of the first turkey, so I had lots and lots of stock. I simmered it down so that it would be more concentrated and take up less room. It turned into turkey jello in my refrigerator.

I picked up our fresh, all natural turkey from the Amish Market in Laurel on Tuesday afternoon. The label said it had been packed that very morning, so that's pretty fresh. This turkey was kind of a splurge, but now we have a chance to compare turkeys of different prices. The Amish turkey did seem to be of higher quality in several ways. It seemed cleaner. It didn't have one leg ripped halfway off the way the other one did. That makes me sad for that other turkey. Maybe he was trying really hard to get away. Anyway, the Amish turkey had the skin cut some fancy way so that the drumsticks were tucked into it. So the string wasn't necessary. I had to untuck them for the washing but they tucked right back in without too much trouble. The Amish turkey was almost 16 lbs which was almost too big for our roasting pan and the platter. I kept saying it wasn't necessary to get more than 13 lbs, but Doug wanted a bigger one so that's how that went. Of course it took longer to cook too. 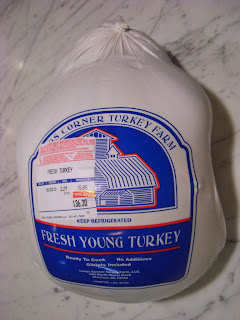 I cooked it upside down for the first 45 minutes so that the underside would be brown and hopefully thoroughly cooked to begin with. There didn't end up being a dent this time, so that was good. I was able to be more attentive with the basting on this one because I didn't have to deal with the stock. I decide to freeze the neck and giblets for later use since I already had a bunch of stock sitting in the refrigerator.

Having the gravy and the stock from the first turkey available to use for the actual Thanksgiving turkey made things much easier. I heated up the frozen gravy and thinned it with the stock and I also used the stock for the stuffing, which made it as moist and turkey flavored as if it had actually been stuffed inside the turkey. So that was successful. I had doubts about that stuffing because I didn't entirely obey my mother's recipe, but it worked out fine. She liked the rosemary that I added in addition to the usual sage. It was the classic simple stuffing that I grew up on, made from dried out white bread, onions, celery, sage (and rosemary), and fresh turkey stock instead of canned chicken stocked or that delicious botulism-laced inside-the-bird flavoring. Sheesh, I've become such a germophobe in my old age!

Anyway, the turkey took thirty minutes longer than planned but the people who have an opinion about such things said that it was moist and tasty and juicy and perfectly cooked, not overcooked. I'm a gravy person, so dry breast meat doesn't bother me that much.

Our oven has a setting called "bread proof" which heats the oven to 100 degrees. I guess that's for something in the bread making process.  It was perfect for drying out the fresh slices of white bread.

Doug bought redskin potatoes for the mashed potatoes and they tasted good and mashed up fine when I first fixed them, but they got dried out when Doug reheated them and the texture got weird. I added more milk to the leftovers the next day and they got back to the right texture. They were probably the least popular thing that we served. I thought they tasted delicious with the little kick of horseradish that I but they were definitely dry when we served them.

The spinach souffle with fresh dill suffered the same fate, but it all got eaten anyway. Doug's boiled sweet potatoes with fresh thyme were perfect, which is not surprising since they were cooked near the end. The vinaigrette dressing I made had too high of a concentration of shallots and then I tossed too much in so it wasn't as subtle as it had been the last time I made it. Oh well. They still all ate it so it can't have been too bad.

The butternut squash soup was delicious, although it wasn't actually made from butternut squash. They were out of butternut so Doug bought something called buttercup squash which looked like some kind of mutant acorn squash. I didn't like it as well, but I went ahead and made it the night before figuring I'd do some remedial spicing of it the next day. We don't have a food processor so I put it through the Foley Food Mill three times to get it to the right texture. I was running short on time and had to go get dressed, so I told Doug to do his thing with the spices. I think he added maple syrup in addition to the sage, rosemary, cayenne pepper and cinnamon that I had suggested. He did a good job.

I realized at the last minute that I didn't have a centerpiece for my table, which is relatively on the small side for seven people, so I improvised with some grapes and a candle. It's kind of messed up looking in this picture because people were munching on the grapes, but when it was first assembled it actually looked pretty cool and it coordinated nicely with the pink flowers in my dishes. I guess it looked good enough to eat, hahaha! The grapes were gigantic and I after I took them all off the stems they looked like giant marbles. 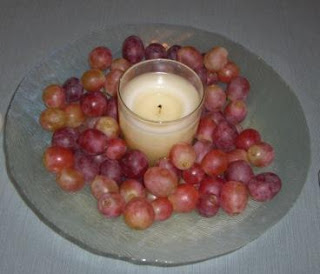 So that covers all of the stuff we fixed, I think. There were other outstanding contributions too. My brother brought an amazing Merlot that he got from some vineyard in Virginia. Usually you think of white wine for turkey, but this Merlot went really well with it, kind of in the same way that cranberry sauce does.

Speaking of cranberry sauce, my mother brought some of her homemade sauce, which was delicious as always, along with some rolls, a mincemeat pie, and hard sauce.  Yum!

My sister-in-law brought a pumpkin pie and a pecan pie and both were amazing.  I took one bite of the pecan pie and thought I'd died and gone to heaven.  The pecans on this pie were so good that they practically overshadowed the pie.  It turns out that they were freshly picked from her mother's pecan tree in South Carolina less than a week ago. 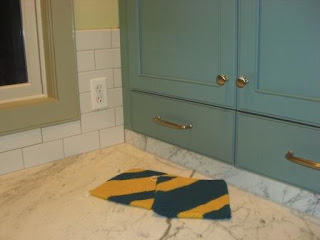 Two things that made our time in the kitchen much easier were these excellent potholders that our friend Donna crocheted for us.  They are so tightly woven and so thick that no amount of heat can pass through them.  In addition to being cute, they are sturdy, durable, and washable.  I'm so glad we didn't have to go out an buy some lame potholders.  These are great!

So that's the blow-by-blow description of our dinner.  I also have some more general observations: