a most peculiar day

Today was the first day I've had completely off in a while and since it was also relatively cool, I was all psyched to mow the grass. But today was also the day that Doug's five year old overpriced lemon of a $700 Honda mower decided to call it quits for the final time. It has been acting cantankerous practically since the first year Doug bought it, during the one spring that he had to mow the grass because I was off cruising. Today was the first day that Doug could not get his precious baby interested, even after considerable poking and prodding. 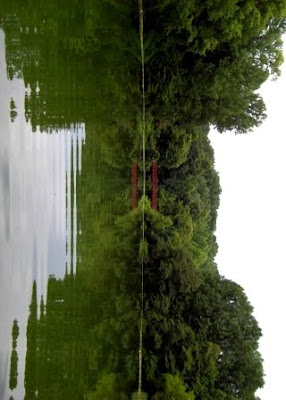 H E L L O
.
I reallyreallyreally wanted to get the damn grass cut, so I quickly went inside to research lawnmowers, and I soon figured out which moderately priced non-Honda would best satisfy my needs. I even called someone I knew who had recently bought the same one to make sure he still liked it. As I was attempting to share this information with Doug he informed me that he had decided that this afternoon would be a perfect time to do our annual paddleboating session at Lake Centennial.
.
I knew full well that this was a diversionary tactic, not only for the sake of getting me off track in my quest to do whatever it might take to get the damn grass cut, (i.e. spend $400 on a new mower) but also so that he could further delay his own wallboarding duties inside. He doesn't seem enjoy it much when I'm not in there cheering him on. But that's not my fault. My plan was that we would both do the taping and mudding just as soon as I finished mowing the grass. I found out later that the secret reason for the paddleboating trip was so that we could stop in some random hardware store in Clarksville, MD that might have lawnmowers to look at on the way back. We live in Silver Spring so that makes total sense. Yeah. 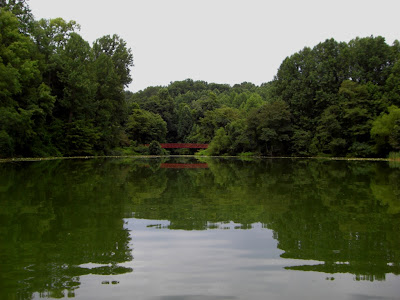 As usual, we had lots of fun paddleboating, although I did notice Doug gazing rather wistfully at the kayaks. The weather was perfect too - not too hot and not too bright. We can go kayaking next time, especially if you mention it before we rent a paddleboat. 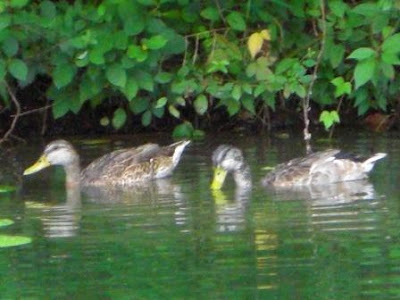 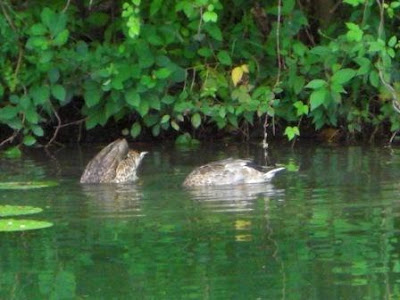 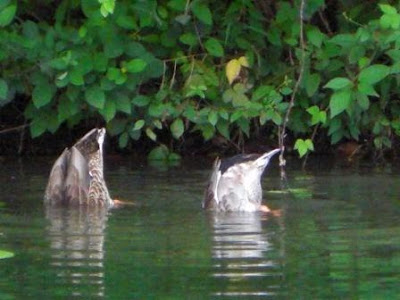 I wish I knew how to make a slide show here. I still haven't gotten around to learning how to do that. You'll just have to pretend those ducks above were in a slide show.
. 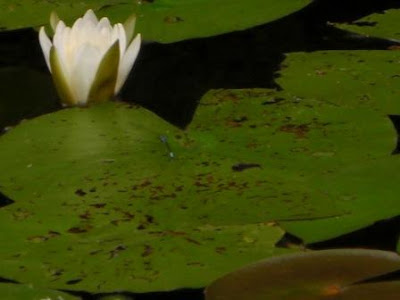 Do any of you locals remember the Enchanted Forest? I read recently that many of the original buildings and statues had been restored and moved to a new location. And we just happened to notice it today because the new location is on Route 108. We stopped in on the way back to check it out.

In case you don't know about the Enchanted Forest, here's a link to the story of how it all got started. 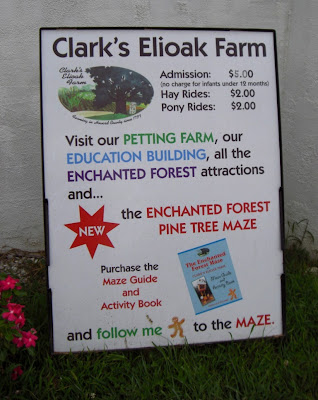 The Enchanted Forest stuff has been combined with a petting farm that includes hayrides and pony rides. There were a lot of little kids in there who appeared to be having an excellent time. It seems like a very quaint and gentle place. When I went there as a kid I was sort of past the fairy tale stage and possibly a little jaded by then (a huge fan of fractured fairy tales), but I thought it was cool the way they had so many stories depicted all in one place. My little brother loved it. 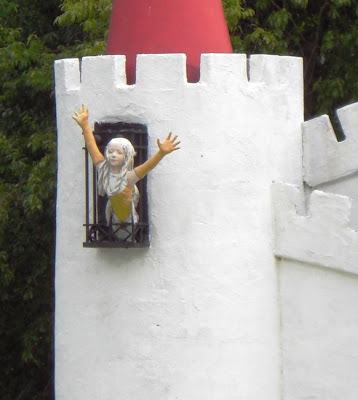 "Help! Save me!"
Rapunzel, Rapunzel, let down your hair. 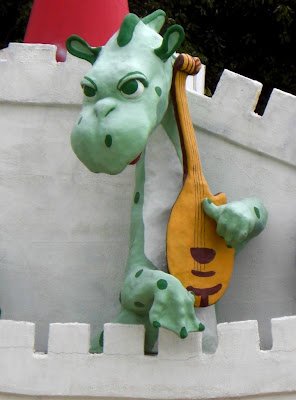 The Dragon as Minstrel 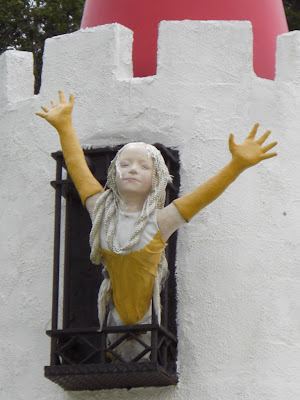 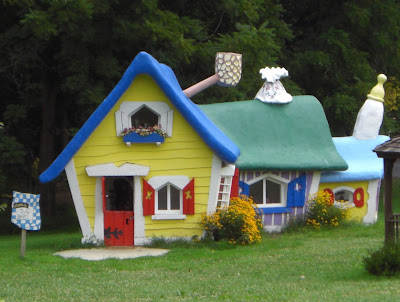 This is the house where Goldilocks visited the Three Bears.
It took me the longest time to figure out what those things were up on the roof. It's a corn cob pipe for Papa Bear, some kind of night cap for Mama Bear, and a giant baby bottle for Baby Bear, all conveniently located right up there on the roof. 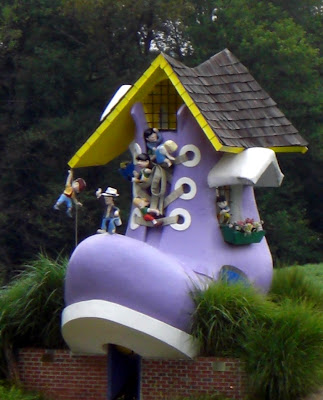 There was an old woman who lived in a shoe,
She had so many children, she didn't know what to do;
She gave them some broth, without any bread,
And whipped them all soundly
And sent them to bed.
NICE! 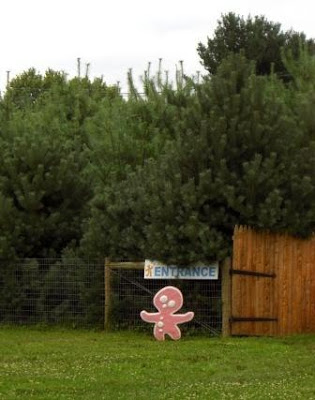 I'm really sort of glad I'm not a kid anymore. Our imaginations were fed by some rather peculiar stories and notions, even back then. I can't even imagine what it's like today to be a kid. Probably a lot more frightening.


So after all the fun was over, we went to the hardware store in Clarksville which had nothing useful in the way of lawnmowers, and then to Home Depot in Aspen Hill which had the one I really wanted, plus two that Doug was interested in. We had a little debate, but it remained friendly. Then I was sent off alone on sort of a reconnaissanse mission to Zimmermans Hardware in Burtonsville to make sure I really liked the one I had picked out because they keep their mowers on the floor and I could actually roll it around, unlike at Home Depot. Finally we went back to Home Depot and bought the one I liked. So that went really well. And it was much more efficient than many of our purchasing adventures are, believe it or not.

Tomorrow I will take the bull by the horns and finally get my grass cut.
Toro, Toro, Toro!
Posted by Cyndy at 1:34 AM

OMG! I hadn't thought of the "Enchanted Forest" in YEARS! I'm from the Shenandoah Valley of VA. Whenever we took a vacation north (like going to wildwood, NJ, or Rehoboth Beach) we would stop at the Enchanted Forest. Thanks for the trip down memory lane!

You're welcome! Wow, I guess the Enchanted Forest had fans from far and wide. It's fun to indulge in a little nostalgia now and then isn't it?

The enchanted forest reminds me of a place in New Hampshire called Story Land. They have the old woman's show, the three bears' house and Cinderella's castle - among other things. I remember being there on a guided boat ride, and one little kid asked the guide if the real Cinderella lived in the castle, and a little girl interrupted and said, "yes, it IS the real Cinderella."

I'm going to have to get to Centennial Park one of these days. My kids have a list of things that we want to do this summer, and we're slowly crossing off items. "Canoe Ride" is still left.

I also remember a big deal being made about the fact that these were, of course, the "real" ones. Most kids accepted that as fact, at least for their first time there.

If you go canoeing there on a sunny day be sure to look for turtles sunning themselves on fallen branches near the left bank of the inlet where the red bridge is.

I want to go to the petting zoo.

I am so glad you didn't cut your grass. This was such a fun post!

Tom- Let's go! I only had time to peek in, so no petting has occured - YET.

Kristin - I'm glad I didn't cut it that day either. I was so much better equipped the next day.

I think that was a very civilized approach to the mower issue, which could have been cause for a shouting match. Bravo! You got what you wanted without tears or having to act out in any way.

I love riding around in paddle boats. It's nice to feel like you are burning a few calories while floating around in a beautiful place.

Sounds like a great day -- much better than cutting the grass and hanging drywall. I thought all the drywall was hung by now...

Barbara - Sometimes a lawnmower lasts 20 years and sometimes it only lasts five. It was time to get a different brand. At this point I think Doug likes the new lawnmower even more than I do.

We just have one more room in the basement to finish wallboarding. The drywall is all up now and we taped the seams yesterday. I'm going to do a couple of skim coats and a little sanding and then it will be ready to paint.

Wow, good old Enchanted Forest! I remember going there as a kid; it seemed like we would never get there -- we lived in Silver Spring and Baltimore was at least a million miles away. Loved your captions, especially the Playtex Living Gloves. (PS -- Jglicksmith is a dear dear friend of mine!)

Bozoette - It took forever to get there from Kensington too, but probably not nearly as long as it took for your friend jglicksmith!

I miss you so. I know you are a busy blog, with much to do. If you ever come back, I'll be waiting.

That's my summer. Oh wait, yesterday (while I was mowing, of course) I saw a SNAKE on the sidewalk in front of my house. He slithered under the front porch just as I started to pull out my camera.

I'll try to get back into the swing of it soon, maybe even right this second!