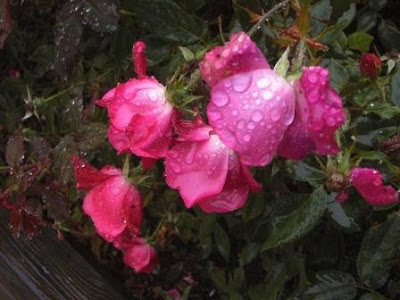 So yesterday was my first day off from EVERYTHING in over two weeks and the weather was just wonderful in honor of the occasion. I'm pretty much not a rain type person, but it did cause this rose bush to look rather delightful.

The internet is not working, but at least I have heat. Hopefully the oil truck will show up before it runs out. Meanwhile, I'm keeping the thermostat set to 55 degrees. That feels really nice.

I have a test I'm supposed to take for an online course I'm taking, but I'm not used to being able to think with a bunch of loud inane conversations happening all around me. Maybe it will be quieter in here tomorrow and I can do it then. I'm not in the mood right now.

Apparently Panera is the big hangout for the Leisure World crowd. There's this old couple in front of me looking out the window and giving each other a non-stop commentary about the various goings on out in the parking lot. "Let's see if that idiot can back out of his space without hitting anyone." "Oh look, she's putting on her seat belt." Most of their comments were really smug and obnoxious and completely unnecessary and unfortunately they were irritating me so much that I was not able to ignore them. It was almost like the senior citizen version of Mystery Science Theater. I sure hope I don't become that bored, obnoxious, and smug when I get old. I'll probably become one of those silent types, rocking in my chair out on the back porch looking at the herds of deer running through. I hope I won't be compelled to say "look, a deer" to anyone who will listen, although I think I've shown telltake signs of that behavior already. I'll just have to watch myself.

I'm not really feeling this posting from Panera thing so I'm probably going to make myself scare for the next week or so. Unless the secret project I'm about to go work on ends up being photo-worthy.

I hope this weekend of wetness passes quickly for all of you!
Posted by Cyndy at 4:28 PM

Take some earplugs the next time you go to Panera. Then you won't have to listen to the geriatric babble.

Gorgeous shot of the roses. I'm sorry the crowd at Panera wasn't nearly as perfect.

Barbara and Kristen - I sure do get mean and nasty when it's raining outside! I think the internet going out must have been weather related because it's back on now. Hooray! Except that I've become a deadbeat student since I didn't manage to get there last night in time to take my exam.

Panera has really good bacon, though.

I haven't made it in there early enough in the day to check out their breakfast sandwiches, but I'll try to soon!

Okay, the bacon, egg, and cheese sandwiches are excellent, and so are the souffles!