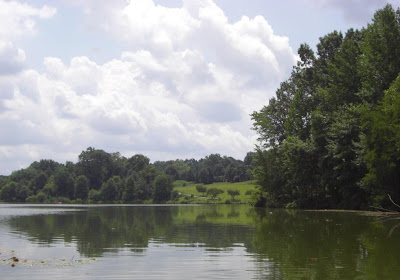 On Saturday we went paddleboating at Centennial Lake up in Howard County. I've been a fan of paddle boats since I was a kid. At first Doug didn't think much of them, but I think he's been gradually warming up to the idea now that he's done it a few times. He was actually the one who suggested it this time, which was very nice. But out on the lake I saw him looking longingly at the kayaks. Maybe we'll do that next time. Anyway, the weather was perfect, with a nice breeze. I should have been mowing the grass, but postponing that was well worth it. It was nice to have some fun for a change. 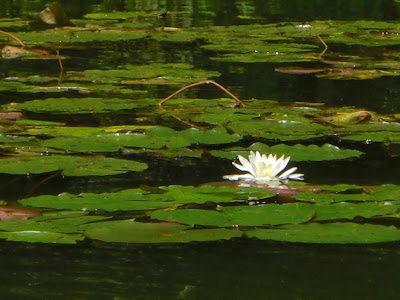 Centennial Lake is actually man made but it's been there a while so it has nice vegetation and animal life. There were lots and lots of turtles, for example. 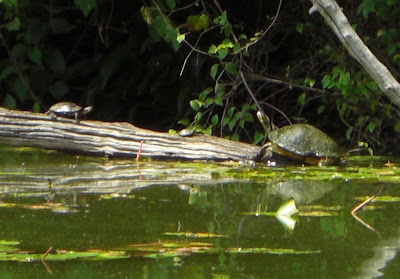 The turtle on the right was HUGE! His shell was over a foot long. 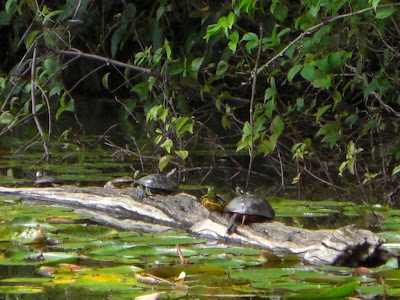 After the big one left, several more came up to sunbathe. There are five turtles on the log above. 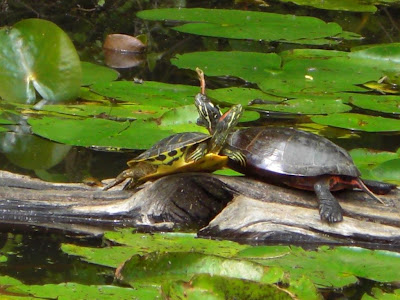 Turtle Love - I guess they are "necking." 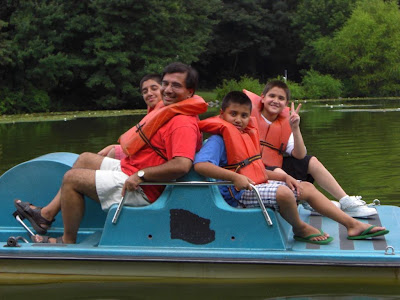 We weren't the only ones having fun on the paddleboats. 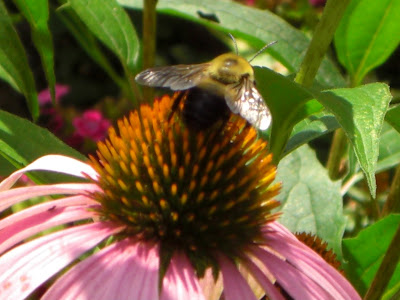 As we were leaving the park, I decided to try out the flower setting on my camera since there was no bee setting. 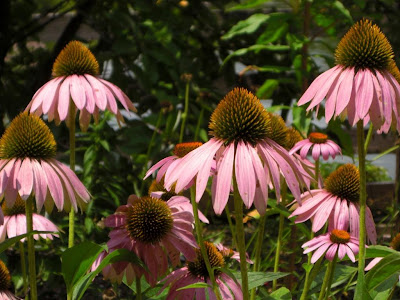 After we got back I went over to the house and put a second coat of paint on the porch railings. It took exactly 6 1/2 hours straight for me to paint all of them. By the time I finished, my back was completely trashed from all of the bending over. But it's better today. We've been killing ourselves working on the house and not having a whole lot of fun. Doug likes that more than I do, which is very nice for him. It is rewarding to see how beautiful everything is turning out though. Maybe when I get another burst of energy I'll do a post over on the house blog. But most of the the time lately I've been too exhausted after a long day of work. 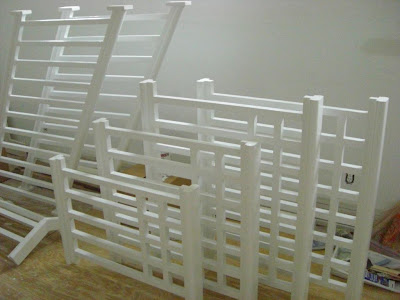 Love the turtle and the cone flower shots. :) Glad you got some fun in with all that work.

Ditto. Good to slide in a break with all that work. Cool turtle pics. My wife and kids keep telling me about a huge turtle in a nearby pond in Bowie, but he never shows up when I go. The kids feed the turtles bread from a bridge, and the little ones scatter when the big one comes out to eat.

lacochran and Bowie Mike - Thanks, we've been on a roll, work-wise, and it was nice to be able to do something different that didn't take up a whole lot of energy or time.

I enjoyed your visit to my blog. My birthday is tomorrow but thanks for the advance salutations. Love the pics of the park,turtles, paddleboats and flowers, too.

Gorgeous photos! I especially like the necking turtles. We live not too far away from that park; I'll have to see if I can con Joe into going (it shouldn't be too difficult!).

Sounds like a much better way to spend your day than by mowing the grass, which is just going to grow again. I love paddle-boating. I have only done it in the Tidal Basin, so I will have to check out this other scenic spot. I've always been fond of turtles, too.

OMG... that picture of the turtles necking is PRICELESS. And should be made into postcards, and a calendar, and an inspirational message poster and.....

Bozoette - Thanks, I've never seen so many turtles of all sizes in a lake before! If you go there, look for them sitting on a log by the left bank as you are approaching the red bridge.

Barbara - I'm glad I put off the mowing, because it means that I was able to put off getting annoyed about the clutch cable breaking on the mower when I finally did get to it. Paddleboating in the Tidal Basin is definitely on my list of things to do.

Lilu - yeah, I know that was bad. It was all I could come up with to describe what looked like a relatively affectionate activity.

Yeah, your turtle photo is 100 times more artistic and classy than my frog video! Nice photos. I like your blog

Okay Leon, but your TURTLE video is about 100 times more orgasmic, and hilarious! Thanks for visiting.