Free Fun in the Woods

Yesterday evening I was ready to head out to a movie, but was suddenly hit with an urge to do something different for a change, especially since we are basically broke right now. I remembered reading a really wonderful blog post from The Natural Capital about a trail near the Burnt Mills dam, which is on Route 29 about halfway between Four Corners and White Oak, and decided it was time to go check it out. 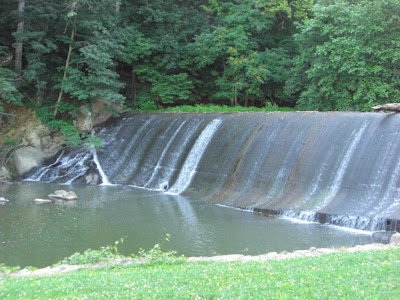 Burnt Mills is on the Northwest Branch of the Anacostia River and was originally a grain processing facility which then became a water filtration plant which was the "first of its kind in the world." If you would like to know more, just click on the picture below. 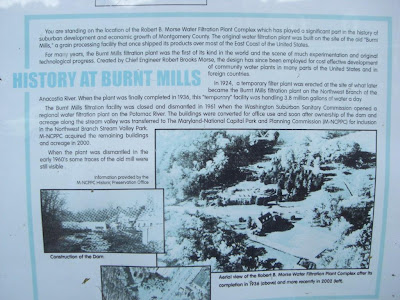 There is a lovely trail there that you can take all the way to Brookside Gardens and it also continues in the other direction to somewhere in PG county. The trail is not rugged at all and is very clearly marked. 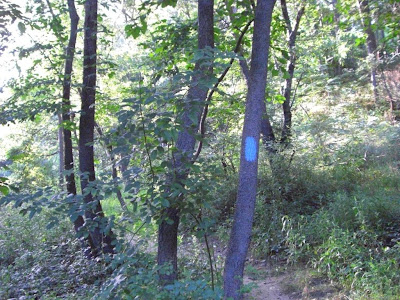 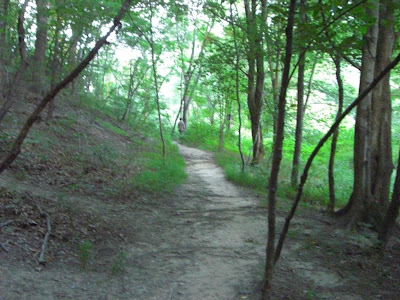 We decided to make it a short little hike because we wanted to get back to our car before it got dark. It was for the most part a rather serene and peaceful outing. 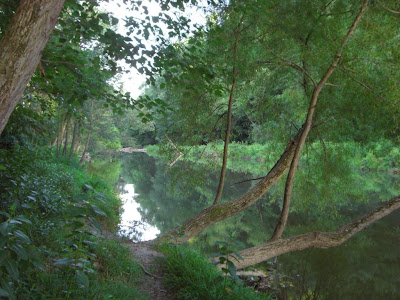 But then, as darkness approached, it suddenly began to get a little creepy out there. The monsters of the woods began to present themselves. The first one to appear was the Evil Root Monster: 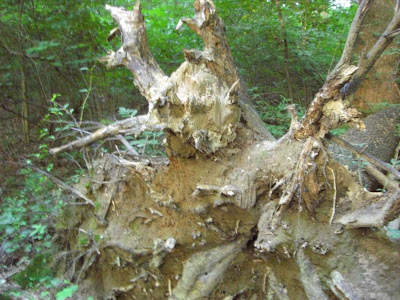 Next we saw the slightly cross-eyed, rather angry looking Log Monster: 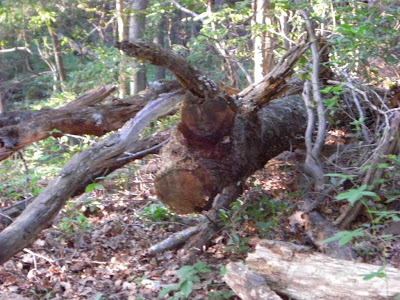 Around this time the Hairy-Legged Spider Monster began to emerge from the depths of the Northwest Branch: 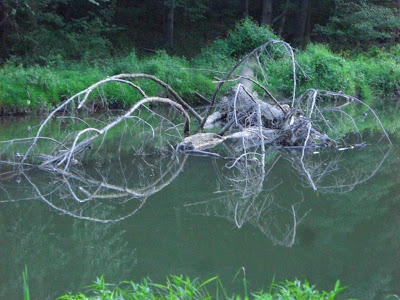 But somehow we managed to emerge from the woods unharmed. I was a little disappointed that I didn't see the legendary ghost deer on our walk. I will definitely be going back for another look. One thing that we encountered that was a source of complete delight was an area that was full of the sound of singing birds (and mosquitoes). I decided to take a video just so that you could hear a small segment of their singing.

And since I'm a total music geek with no life apparently, I decided to transcribe the song of the main bird on the video below so that all of you music buffs can follow along. These are the actual notes the bird sang. The notation actually starts about 5 seconds in, immediately after the mosquito introduction which seems quite reminiscent of the Theme from Charlie's Angels. The meter for the main bird call is in 7/4 meter (my favorite!) and you can hear the other birds keeping the beat in the background with various answering figures. I was especially impressed by the fact that although the main bird was a beat late with his pattern in bar 3, he managed to get right back on track with the four 16th notes on beat four. Maybe he was just backphrasing in that one measure. The tempo is very slow - only about 56 beats per minute.

So all in all it turned out to be a wonderful alternative form of entertainment. And best of all, it was FREE!
Posted by Cyndy at 12:04 AM

Only you would figure out how to transcribe birdsong!

There are a lot of good things to do for free in the DC area. Looks like you discovered one of them yesterday.

Is there an end in sight to the foam-core fantasy?

I've taken this trail from Adelphi Park (off University Blvd in P.G.) up to Brookside Gardens, but that was eight years ago. That might have been before the time of the Ghost Deer. It's amazing how close it is, but it seems so far away from everything when you get in the woods. The bird might have been "backphrasing?" Too much!

Barbara - It looks like we are going to have to switch to mostly free stuff for the time being. The end is in sight but it's based on how fast we can get the work done, and we are not fast, we are careful.

Mike - Did you do it all in one day? How long did it take? Next time we go we will set aside more time so that we can at least go from Route 29 up to Brookside Gardens. It really does seem like another world back there in the woods.

Cyndy, it was with a hiking club called Center Hiking Club back when I had more free time on my hands. My recollection was that it was probably a four hour hike, but at a leisure pace with maybe ten other people. No membership required. They always meet at a Metro stop for convenience, and they have a variety of city/suburban hikes and longer trips to the mountains.

I hear at night the Log Monster eats little children who stay inside watching television all day. They're not afraid of him because he's not a Transformer . . . which is why he's unstoppable.

It might be well marked but somehow we managed to wander along the Northwest Branch for about three hours one day (very hot - no drinking water along, of course) without ever finding Brookside Gardens. Next time I bring the GPS.

Thanks for the link!

Your singer is a wood thrush - Possibly my favorite birdsong. Love the transcription!

Mike - Thanks for the info!

Tom - I think you have to walk along Kemp Mill Road for a bit to find the next part of the trail, not sure though.

Nat Cap - Thanks for identifying the bird call. I wondered what it was.

Oh, heaven! What a nice little weekend. Except for the spidery thing... he's creepy!

you are sooooooooo creative!!! I LOVE IT!

I think that's a wood thrush whose song you transcribed. How cool that you did!

the tree monsters truly are scary. I used to walk in the woods around Sligo Creek which eventually becomes part of the Anacostia. I swear there are fairies and dwarves and all kinds of being in those woods! Luck you got out in one piece!!

LiLu - yes it was fun. I want to go back to see if I can find the white deer!

Twinkie - thanks, but sometimes I suspect that what I see is more hallucinatory than it is creative. Sort of. I just go with it because it's fun.

Kristin - I'll bet you got at least ten times as much exercise as I did. On the other hand, walking on trails can be very ankle strengthening if you are careful, which I definitely need to be.

Reya - I was very happy to find out what kind of bird that was because I had no idea before. I really like the vibe that is out there in the woods - it is rather magical. And I'm definitely going back for more.

Looks serene. Even the monsters. :)

And I LOVE Brookside Gardens. Used to go quite a bit when I lived in MoCo.

I like all of the ones of trees. My favorite is the long shot of the creek/river with the sky reflecting in it. Beautiful. Looks very sleepy bayou..ish to me.

lacochran and Garrett - Sorry for the tardy reply, two weeks later no less. I'm on a bit of a roll right now with painting and stuff and I've been neglecting my blog. Anyway, thanks for your comments!

This is great! And that is my favorite running trail. Glad you found it too.

Yeah Scenic,that would be a great place to run. It has a very special atmosphere.