These were the two themes of my recent weekend in Asheville, NC. It all began on a miserably rainy and cold Thursday night. We left after rush hour and drove part of the way there. We made a junk food stop at the Sheetz in Salem, VA and a five pack of Peeps seemed like an appropriate snack. That is until the guy rang them up and I saw this: 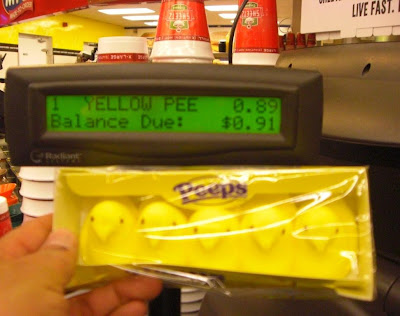 If you can't read what the cash register says, click on the picture!
I temporarily lost my appetite after that so I ate them the next day instead. And speaking of Peeps, you must check out the World's Cutest Peep Post at [F]oxymoron's blog. It's absolutely adorable! Go look!

On Friday we were driving through the beautiful mountains of southern Virginia, Tennessee, and North Carolina. I pulled over at a "scenic overlook" and took a picture of the foggy mountains. The view was more subdued than usual. 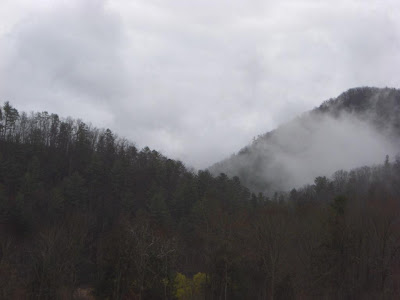 On Saturday while Doug was doing his workshop at UNC Asheville, I did a little exploring. I went up Town Mountain Road to see what I could see. It was rainy and foggy but there were still fun things to see, like: 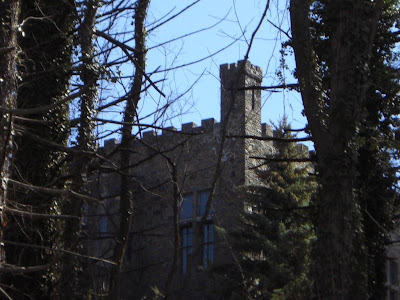 And turkeys! I almost ran over the first batch of them because I driving just a little too fast on that winding mountain road. They were all over the road like worms on a sidewalk. I saw about twenty of them altogether at various times. As you can see in this video, they don't move very fast. 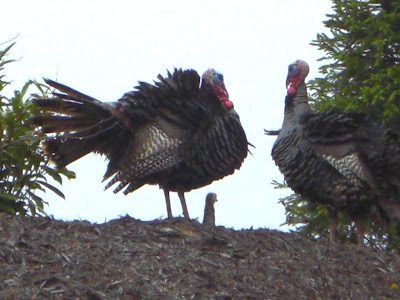 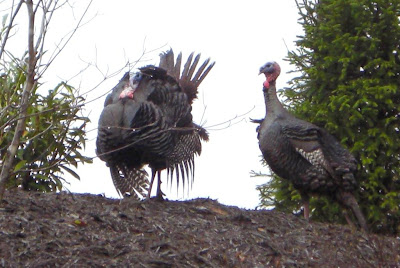 One of them kept ruffling his feathers at me. 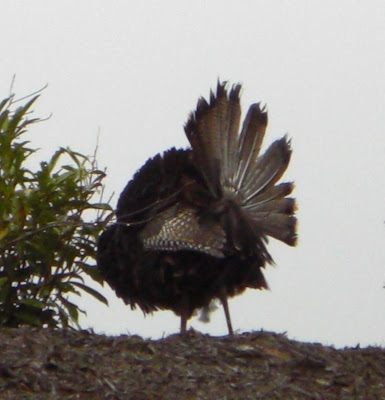 And then he farted at me. Or at least that's what it sounded like.

Speaking of farting, on Sunday I took Doug up there to show him the turkeys on our way out of town. It was sunny for about an hour and there were suddenly no turkeys to be found anywhere. Maybe they only go near the road when the weather is crappy. In spite of the weather everything was in full bloom down there in Asheville. 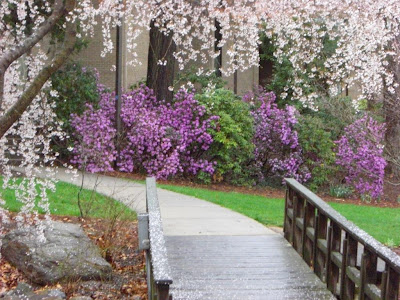 By the time we got to Lexington Virginia I was getting really bored with the interstate scenery so I decided to see where one of the side roads went. We went by VMI and Washington and Lee and then continued down that road for a while and tried a few others, just for fun. Getting lost on purpose is my idea of a good time. You never know where you'll end up.

The road wound around in what seemed like a big circle. It went across a river, over some mountains and through a forest, past a graveyard and some farms, and it even became a dirt road for a while. 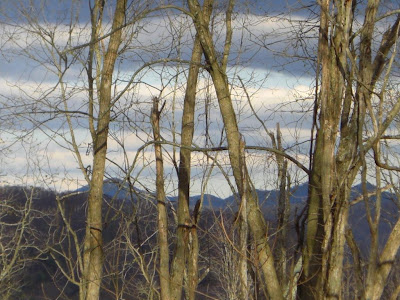 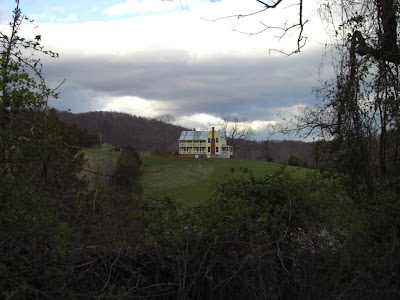 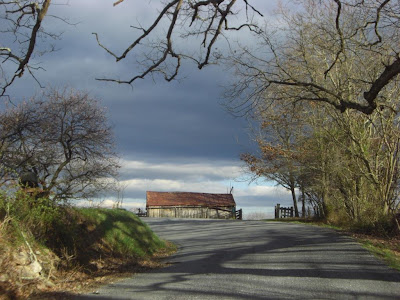 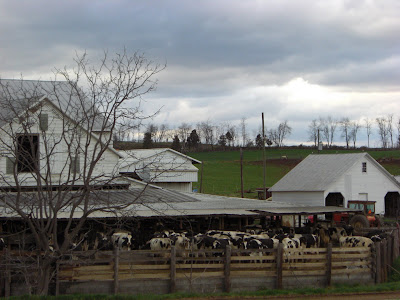 Eventually we found our way back to the highway again. But not before coming across one additional turkey. 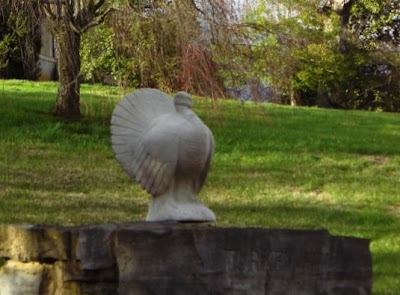 So it was indeed a foul and fowl weekend. At least it was as far as the weather, and the various birds were concerned. 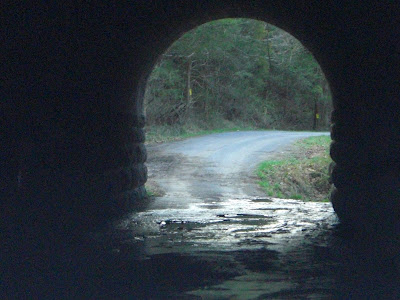 One of my stepbrothers moved to Asheville but I've never been. Looks gorgeous.

Some great pictures, especially the last one. I like to drive much as you do, choosing to get lost in pretty places instead of sticking to maps and main roads.

Thanks for the photo compliments. I haven't been out and about much lately so it was great to have a little getaway/road trip. I like Asheville a lot - it's sort of a hippie haven, which means it has lots of cool shops, an art and music scene, and excellent restaurants. The fresh mountain air and beautiful scenery is an added bonus.

and those turkeys made me hungry for a Thanksgiving meal. Yummmmm

LiLu - Yeah, Asheville is a great place to spend a few days. It doesn't feel very "southern" except for the laid-back pace. I've been through there several times in the past and I've always enjoyed it.

Twinkie - So it's turkey for dinner and chicken for dessert, eh?

First of all, the photograph makes you want to jump in the car and go it's so lush. The turkeys were doing a mating dance/ritual. I see them all of the time in New England. I've done a lot of fun things with peeps. I had friends take them to Key West and the Virgin Islands to do beach scenes with peeps for me. One Easter, I went to a friends house with peeps, and to keep the kids entertained, we had a contest with them involving the microwave: whose melts fastest, which one is the most digusting, etc. She told me the kids still talk about this when they think of me. Great. I love the mountains in clouds. Welcome to Magic Turkey Kingdom.

Hi Cube! I just recently heard about how some people like to make the peeps explode in the microwave oven. Then I started thinking about peeps s'mores for some reason. I wonder if that would be good. I like the notion of peeps heading down to Florida for spring break. And the next time they go to the Virgin Islands they should make a movie called "Peeps of the Caribbean."

One good thing about rain on a trip is that everything looks so beautifully moist and green as you are driving by.

And I guess it was vain of me to think the turkey was ruffling his feathers at me when there were clearly other turkeys in the picture.

I always wondered what made them yellow.

Alright, that does it, lacochran - I know what you're implying! I guess I'll be sticking to the pink ones from now on, ha ha ha!

Actually the yellow ones seem more "natural" to me somehow - I guess it's the egg yolk effect. I'm pretty good at pretending.

I left a much more detailed response on my blog comments in response to what you wrote. You never know where you will find a Little Jimmy fan.

You can place two peeps facing each other in the microwave and arm both with toothpicks. Start the microwave - the first to stab the other WINS! Good times...

Tom - thanks for the link!
Thinking Fool - now I'm thinking about peeps in a castle dueling it out so that one of them can win the fair maiden. Thanks!

The house with the dark clouds surrounding it gives me a feeling. Not sure what that feeling is, yet. Great pictures, especially that one.

Thanks Garrett. I love old houses because they seem to give off some sort of vibe about all of the things they've seen take place over the years. Sometimes that comes out in photographs.

There used to be a lot of abandoned houses in DC like that. Most are gone now for all the new construction. Thats a good thing because the creepy vibe they gave off was usually something bad WAS going on in them. They were great to photograph.

This makes me SO want to visit Asheville - as I've never been to that part of NC!

Great blog you got here. It would be great to read a bit more concerning that topic. Thnx for sharing that data.
The only thing this blog miss is such photo of sexy girl :)
Sexy Lady
A Level London Escorts