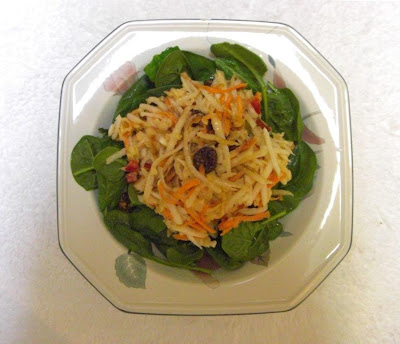 Our landlord brought us a bunch of super fresh looking turnips from his garden. I don't usually go out of my way to consume turnips, but I have enjoyed turnip greens in the past. So we immediately cut the tops off and cooked the greens. They were pretty good.

I've had cooked turnips maybe once or twice - I remember them being kind of bitter and mushy. I'm okay with bitter, but not when combined with mushy. Our landlord said that he usually slices his turnips to put into salads. That made me think that raw turnips probably taste similar to jicama or radishes. Then I started imagining coleslaw with turnips instead of cabbage. Doug went on line and found out that turnip slaw actually is a thing that people make. Some of the recipe reviews weren't too favorable but we decided to go for it anyway. Except that we didn't follow any of those recipes.

We knew we were going to have a mixture of turnips and carrots, but then Doug decided to throw in an apple, which totally matches the turnip's texture but is sweeter. Then he asked me if I thought some red bell pepper would be okay. I thought it would be weird, but maybe not too weird for this particular salad. Then I thought of adding dried cherries - which is weird, but it ended up to be an excellent accent flavor. Our made-up turnip slaw turned out to be really delicious - very fresh and tangy, and just a tiny bit sweet. I would have prefered less sugar, but I think some sugar was probably necessary to counteract the bitterness of the turnip.

I actually didn't make this turnip slaw - Doug did all the work. I'm glad he likes to cook because I get to just sit here and say add this and add that. I usually come up with more delicious food combinations than he does, so it works out. He's the cook, and I'm the "food designer." Ha Ha Ha. But this time we designed it together.

So here's the very vague recipe:

Shred 1 turnip, 2 small carrots and 1 crisp unpeeled apple.
Add 1/2 chopped red bell pepper and about a half cup of dried cherries
Make a dressing by mixing mayonnaise, white vinegar, sugar, salt, pepper
Stir it all up and enjoy. It's pictured here on a bed of spinach in a cracked bowl.

I'll bet it tastes as good as it looks! Don't you just love creating recipes?

If you have some turnips left, try cooking them. I love all parts of this family of food!

Who would have thought! It does sound good though. And hooray for men who like to be in the kitchen!

I kind of love turnips. Is that weird? I'm terrible at making up recipes, though. Mine taste so much worse than the sum of their parts. It's bad. I admire your culinary creativity.

Barbara - We added some cubed turnips to some lentil soup. It added a little extra flavor.

Lilu - I feel lucky that he enjoys working in the kitchen. Now if he just weren't so messy!

Kristin - I'm definitely a new fan of turnips. Sometimes when Doug gets creative it's kind of undelicious. I usually get lucky, but I don't cook that often. Anyway, it sounds like you do a lot of baking where it is very important to combine things correctly and you do seem to have many people who are fans of your baking skills.