an extra day in New York

The plan for the next day was to get up, check out of the hotel, get my car before the street cleaning deadline, drive downtown to pick up my bass, and then head home. But I was really enjoying my solitude so I decided to see if my room was available for an additional night. It wasn't, but they did have a different room so I decided to stay. I opened the curtains and looked out the window. The view included a brick wall about four feet across from the window and this plastic owl: 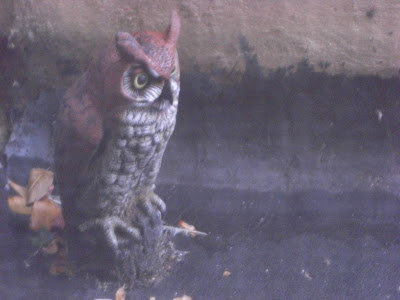 I guess he was there to scare other birds away.

I had to check out and register separately for another room so I left my bag in the checked baggage room and got to my car about 10 minutes late. It was the only car left on that side of the street and I guess I lucked out not getting a ticket or getting towed.

As I was heading back uptown after picking up my bass I suddenly, on a whim, decided to see if I could drive to Coney Island. It was about noon and my room wouldn't be available until 2:00 and I was already in my car, so what the hell. Except that I've never been to Coney Island and the only thing I knew about its location was that it is on the ocean in Brooklyn. Since I have a decent sense of direction and had plenty of time to kill, I wasn't too worried. If I couldn't find it, I'd see other stuff instead.
I turned right on Canal Street and went over the Manhattan Bridge and that became Flatbush Avenue. I've seen that street on subway cars so I thought so far, so good. I'm not lost yet. It went by Prospect Park, which I'd heard of. It looks like a beautiful park and it's big - maybe it's Brooklyn's answer to Central Park. So far Brooklyn seemed really nice - it's kind of more like DC than Manhattan in a way. At least what I'd seen of it so far. At this point I had no idea whether I was heading towards Coney Island or not, but I was perfectly happy driving on Flatbush Avenue for no particular reason.

Right after Prospect Park I saw Ocean Avenue and figured that was the ticket and it did seem to go in the right direction. It went for a long way through some beautiful old neighborhoods with really great architecture. I passed an absolutely gorgeous old synagogue called Midland or Midfield. Unfortunately my camera was in the back of my car and it was raining so I didn't get a picture. Then I saw Avenue M, N, O, and P, and was getting all excited that I'd see Avenue Q (I've seen "Avenue Q" but not the actual street) but there was a Quentin Street or something and then it went back to Avenue R, etc. I thought that was pretty rude.
Anyway I took Ocean Avenue all the way to where it sort of bumped into a harbour and I turned left on Emmons Avenue but it ended after a few blocks. The area I was in was called Sheepshead Bay.

So I turned around and headed south. I turned left at the next road that I thought went east and that finally took me to the ocean. I parked and walked up to the boardwalk there. I was surprised to discover that nearly everyone was speaking Russian. I used to play in a balalaika orchestra and I've been to St. Petersburg a few times so I know what Russian sounds like. It definitely was not Yiddish. Also, people were dressed the same way they do in St. Petersburg - kind of more dressed up than you'd ordinarily expect to see at the beach. Anyway, I discovered that I was in Brighton Beach and Coney Island was farther south on the same boardwalk.
But it was cold, windy, and a little bit damp, and my still-recovering foot was not feeling that great so I got back in my car and drove a little farther south. About half of the stores had signs with Russian letters and no English letters. This one had both:

I didn't really realize there were actual Russian neighborhoods in Brooklyn - because I don't know anything about Brooklyn! So I'm already making some cool discoveries on my little trip to Coney Island. I guess previously I thought all of the Russians mostly lived in Jewish neighborhoods, which shows how little I've actually thought about where Russian immigrants might live. Because, obviously not all Russian immigrants are Jewish. Duh!!! Anyway the balalaika players in DC certainly don't all live in the same neighborhood.
I still had my bass in the car and the neighborhood did not exactly have what I would describe as a crime-free vibe, but I managed to find a parking space that offered a little psychological protection, if nothing else: 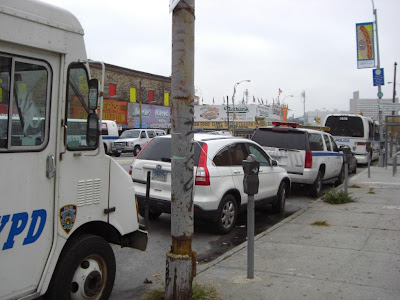 I didn't see a police station, but there sure were alot of police cars parked there. Now this is the kind of building I was really expecting to see: 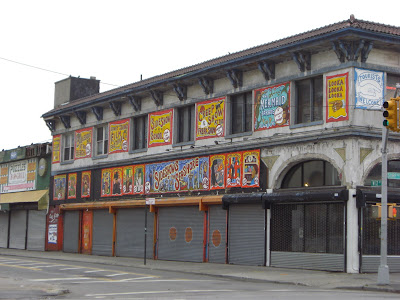 And especially this one, which is where I ate lunch of course! 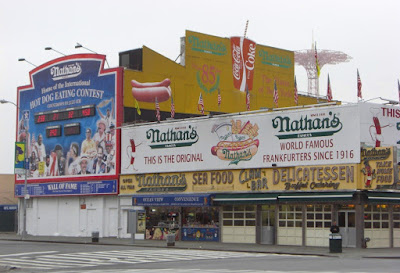 They grill their hot dogs so they have delicious little burned places on them. I got one with sauerkraut and mustard. Yum! After lunch I went to the beach: 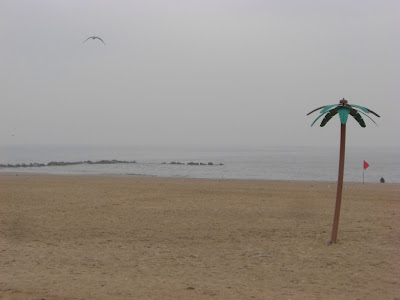 And then to Astroland. Everything was pretty deserted. Since I was having a deliberately antisocial trip, I kind of enjoyed that. I would have ridden on these rides if they'd been open. But I think I read somewhere that some of the main rides in Coney Island have recently closed for good. That's a real shame. 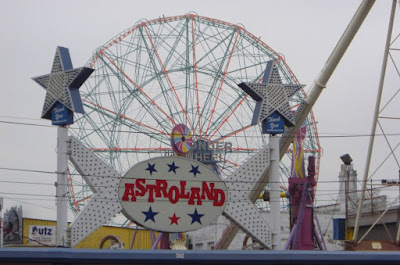 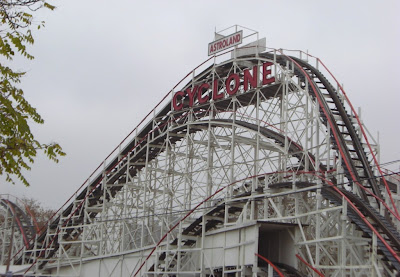 Since the weather was so dark and dreary I was not able to obey this sign: 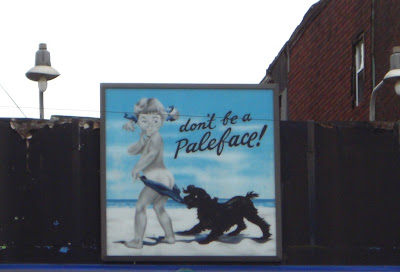 I decided to see where the "Belt" Parkway went when it was time to head back to Manhattan. I lucked out once again. It went near Governer's Island where I stayed once when Doug was in the Air Force, and then there was a tunnel to Manhattan that I didn't even know existed which eventually became the West Side Highway. So that was super convenient. I didn't find any street parking so I parked in a garage instead. When I got back to my hotel my new room was ready and it had completely different scenery out of its window:
To the left 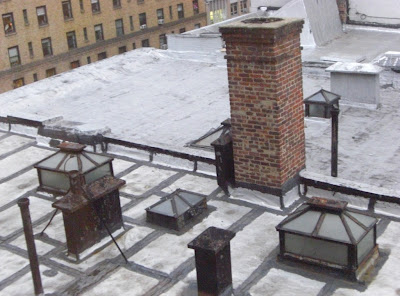 And to the right 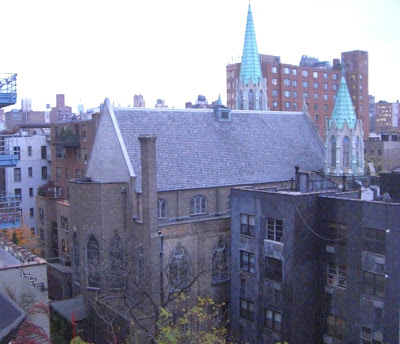 I went up to the TKTS place and got a half price ticket to see Gypsy which was excellent, but very long. The kids in the show were fantastic. The orchestra was fantastic and it was great to see them behind the stage for the overture and entracte. Patti Lupone's Mama Rose was very different from Rosalind Russell's. She really made it her own. I'm not sure if I liked it better, but I did enjoy the fact that it was different. Her voice was a little distracting because the tone quality varied widely throughout her range. She had a lot of breaks. But it was all in tune. The final scene where she kind of goes nuts was intense and powerful and her tonal quality was all of a sudden extremely consistent. Maybe her voice only works really well at super loud volumes.

After the show I went down to Knickerbocker's and heard JoAnne Brackeen and Cecil McBee. They were wonderful as usual.

The next day I headed home. The clouds began to clear away the second I crossed into Maryland. Doug said the weather had been warm and sunny the entire time I was gone. But that's okay. The weather in NY was a better match for my frame of mind during the time I was there. 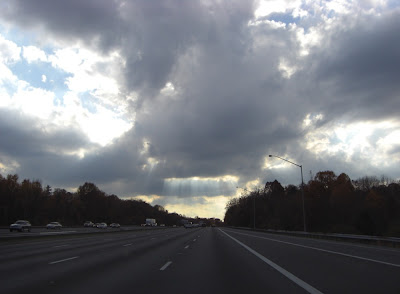 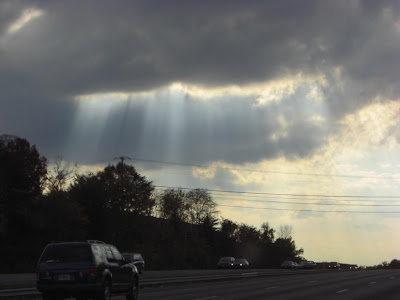 I've always wanted to go to Coney Island after I read a book of poems once called A Coney Island of the Mind. Your pictures are exactly what I imagined.

I live a block from Prospect Park and grew up in Sheepshead Bay. I am really glad you enjoyed Brooklyn. Your view is refreshing!

I would love one of those Nathans hotdogs with the little burned places and some of that great mustard. My stomach is growling.

I'm glad you had such an adventurous trip to NYC. Your wandering in your car sounds like something I might do. Did you ever see Mermaid Avenue? I once wrote a post about that.

I'm sure you're happy to have your bass work done. Our mutual friend says that luthier is reputed to be the best around. She thought your bass had sustained damage in a car accident at one point. Is that true?

Nathan's are amazing, but if you're in NY, you have GOT to find a Grey's Papaya!

You're very brave, driving all over the boroughs like that! I've never been to Coney Island, but I'd just love to ride that roller coaster.

You make me want to drop everything and go to New York. I just visited Coney Island for the first time this summer and absolutely loved it, for what it was and what it still is. Though, I really wanted a frozen custard but no luck.

SW - I guess I've seen it in movies, but I never paid much attention. It was fun to see it without having many expectations.

michael - I'm glad you enjoyed reading my first impressions of your hometown. I'm looking forward to visiting Brooklyn again now that I've seen it. I love Manhattan, but it's pretty familiar to me now.

barbara - I enjoyed your post about Mermaid Avenue! Unfortunately I didn't see it. I was mostly on Surf Avenue and Neptune Avenue.
Yes, my bass was expertly restored by David Gage after it had been demolished in a car accident. He is my hero.

lilu - I've always been all about the pizza slices in NYC. I'm definitely overdue for a Gray's Paypaya special!

bozoette - I started writing down the roads I'd been on so that I could backtrack if necessary. I hope the rollercoaster isn't one of the rides they've permanently shut down because it looks like a good one - all rickety and steep.

kristen - If you posted about it, I probably read it, and that may very well have been the reason it occured to me to suddenly go there. So the next time I go there, hopefully in the summer, I'll eat a custard in your honor. They must have a frozen custard stand there somewhere, right?