sometime it's okay and sometimes it's not

Last week we took down a whole bunch of the lower branches on our birch tree so that it would be easier to mow under and so that it no longer looked like an enormous bush. It is beautiful now. 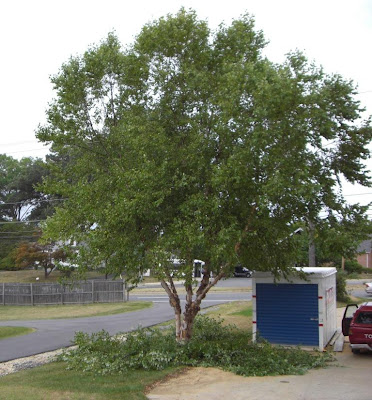 When we came back from taking the branches to the recycling area at the dump we continued to work on the siding. We've made pretty good progress, but it's not going nearly as fast as we'd like. 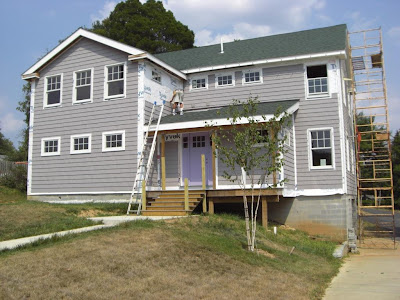 Towards the end of the day my left foot suddenly started hurting a lot in one spot just above the arch. I'd sprained my right foot a few days earlier and since it was almost all better, with the help of an ankle support, I was back working at the house again. I guess my left foot had been working extra hard to accomodate my sprained right ankle.

I iced it when I got home. It continued to hurt all night so the next day I went to a podiatrist. The x-rays showed that I have a couple of extra bones in my foot and that apparently the one above my arch has a rather pointy chip sticking out that looks like it might be a little fracture. She sold me a $275 boot that I'm supposed to wear for six weeks.

That means I can't climb a ladder, or go for walks, or play bass standing up, or mow the grass, or do anything else that I need to do, for SIX WEEKS. The timing of this is absolutely horrible. We have so much work to do on the house and now I'm totally useless. I'm starting back at UMD this fall too. That's going to be fun.

That was Friday. And I had to cancel out of a gig Friday night, which totally sucked. On Saturday Doug had a gig in Wilmington that included a hotel room. Since I wasn't working that night, I went along so that I could sit on the bed and watch TV all evening, giving my foot some rest and elevation. In our temporary place we don't have a TV or a couch so it's not that much fun hanging around the house. I can only take so much time in front of the computer.

On Sunday we had to get up at six to make it back down to DC for my brunch gig. I took a stool and it was fine. And I could walk about twice as fast as I could the day before. But it's still really slow with this boot thingy. Anyway here's a view from our hotel room in Wilmington at 6AM Sunday morning: 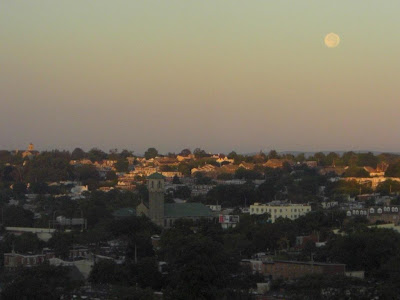 Injuries don't ask if it's a good time before they happen. Sorry to hear about your foot. I hope the 6 weeks go by quickly. Maybe you can find other ways to contribute to the house project.

I'm so sorry about your foot! I'll be thinking happy teeny foot bone thoughts for you and wishing for a speedy six weeks.

Thanks, Barbara and Mo, for your well wishes. One week down, five to go.