I have always loved playing this “In the Mood” show that I am currently touring with. It is excellent, very well written, and a real crowd-pleaser. It is very rewarding to perform because it touches so many people on so many different levels.

As a woman on the bandstand playing 1940s music in this day and age, it is particularly moving to me whenever an elderly woman comes up after the show and tells me how she and a number of her friends played in bands during WWII because of the vacancies created by all of the boys going to war.  And then inevitably comes the comment about having had to give it up after the men came home and how much she missed playing, and how meaningful it was to see me up there on the bandstand playing “her” music.

That always brings tears to my eyes. And that same conversation has taken place at least five times during the past three years of this tour. I know that most of these women probably weren’t playing with the “big boys” in the major bands during WWII, and neither am I now, but it is still thrilling to realize that my presence on the bandstand is so appreciated by certain members of the audience in such a special way.

This past summer I met a woman during the Victory Day celebration at the “White Cliffs of Dover” My ship just happened to be in docked in Dover on that particular holiday and I went up to the castle to check out the festivities. This woman had worked in the secret tunnels under the castle during WWII and she also played drums in a military band, but she said she was only allowed to do that during the war.

It is a such a shame that so many women were basically forced to stop playing after World War II ended. I told her about my gig playing bass for “In the Mood” and how I always enjoyed meeting fellow musicians, especially those who had been musicians during the era of this show. They are the real deal.  And here is my new drummer friend from Dover: 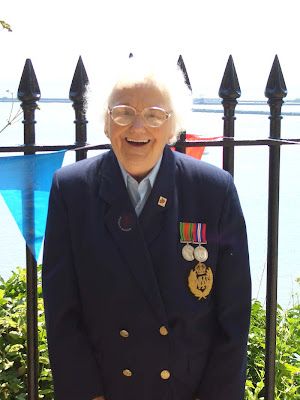