Nature has dealt a cruel blow to the pair of geese that I've been obsessing about since the middle of May when I first saw their nest. They laid their eggs on a tiny island in the middle of a drainage pond and unfortunately the water level fluctuates quite a bit. The mother was apparently still in the midst of laying her eggs because she would occasionally leave the nest for short periods of time. It looks like there are two or three eggs in there. I read that once the goose lays all of her eggs she doesn't leave the nest until they've hatched. So hopefully she had a few more to go. 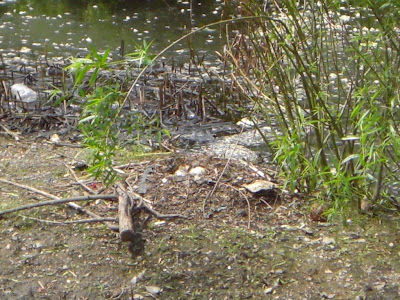 When we got all that rain last week the island was nearly completely under water. I took this picture around noon on Tuesday. 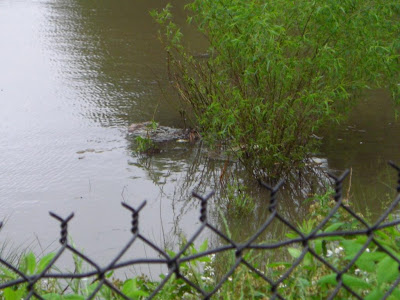 Later that evening the geese came back and they just stood there motionless while we looked at them. It was pretty sad. I don't think they had quite figured out what they should do next. I know how that feels. The water had subsided a little bit. I was sure that the nest had washed away and unfortunately freshly laid goose eggs don't float. 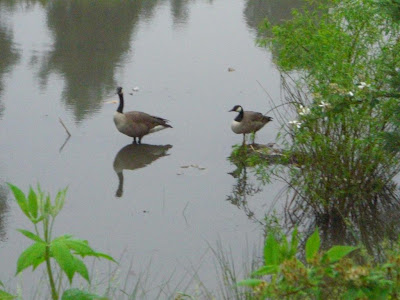 I checked again on Wednesday but they weren't there. I think they are probably gone for good. Maybe they found a new place to lay the rest of their eggs. 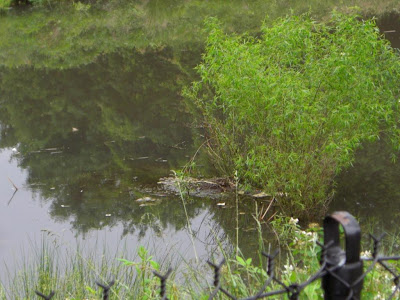 On Thursday I went back one last time. The water level was back where it had been the very first time I saw the nest. The twigs of the nest actually looked like they had survived the flooding, but the eggs are gone. So I guess I won't be seeing any one day old goslings swimming around in this pond anytime soon. I hope that she had a couple more eggs to drop and she found a safer place to build her new nest. 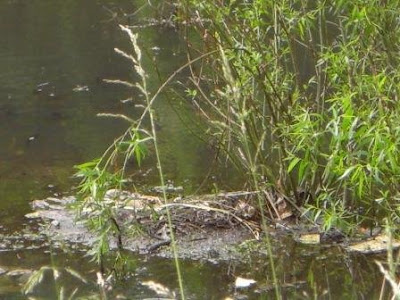 Life is so random sometimes. Since I became a freelancer I've learned that it's all just part of the package. You just deal with whatever comes your way, however good or bad or strange it happens to be. We lost our home four years ago and we're still rebuilding it. That disrupted a rather nice steady employment situation that I gratefully enjoyed for four years.
Then I was given a wonderful opportunity to finish my M.M. degree. On the very first day of school I got a call for a three month jazz trio gig in Dubai. That is exactly the kind of thing that I have always wanted to do but hadn't really pursued so that was very random. I was bummed that I couldn't do it and I saved that message on my phone for the entire school year. The year of school was wonderful though and well worth doing.
While I was at graduation I got a call to do a three month ship gig in the Mediterranean, which I can't do yet because I need to stay home and finish building my house. And exactly one week after getting a masters in jazz studies I suddenly and inexplicably find myself having a bunch of classical gigs, including a performance of the Mozart Requiem and a recording session for a new requiem by a local composer.

How sad for the geese parents. To see your family washed away is hard for any species. I hope they have some eggs still to lay.

I like to think there's a reason for (or at least some good in) everything, but sometimes, life's just so random. That's might just be the cycle of life. It sounds sad.

It is sad. They seemed so forlorn. I was sad too and couldn't bring myself to post about it for a couple of days. I certainly hope they have more success in a different location.

This is why I was glad that the ducks that visited us a couple of summers ago didn't lay eggs. I read that ducks lay something like 10 eggs in the assumption that at least some won't make it for whatever reason. It would have been sad to see Mrs. Duck sitting on a nest and then no ducklings or fewer ducklings each day.

I wish the ducks would come back.